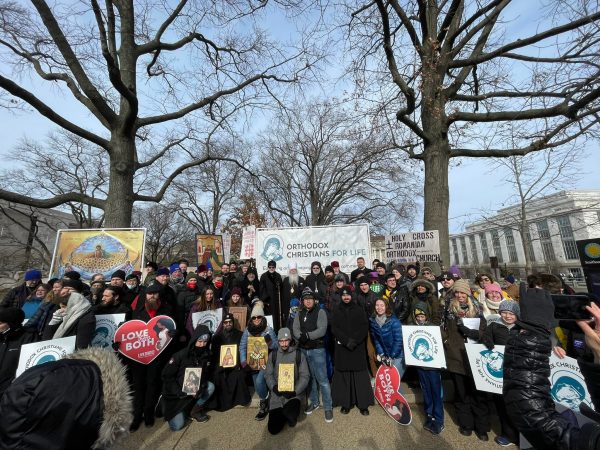 On Friday, January 21, 2022, many Orthodox Christians led by twelve hierarchs of the Assembly of Orthodox Canonical Bishops, joined the annual March for Life in Washington, D.C. on the anniversary of Roe v. Wade, a decision issued in 1973 by the United States Supreme Court legalizing abortion nationwide.

Orthodox Christians gathered together in one voice in defense of life and to condemn the terrible reality of abortion. As His Beatitude Metropolitan Tikhon affirmed in his annual statement made available early this month, “The Orthodox Church continues to hold fast to its ancient belief that all human life, from conception in the womb to our very last moment, is sacred to God. For the Holy Scripture tells us that ‘God did not make death, and He does not delight in the death of the living. For He created all things that they might exist’ (Wis 1:13–14).”

On Thursday, January 20, a delegation of twelve members of the Assembly of Canonical Orthodox Bishops of the United States of America represented the Orthodox Church during an evening Mass at the Roman Catholic Basilica of the National Shrine of the Immaculate Conception. Following the service, the hierarchs were hosted by His Eminence Archbishop Elpidophoros, Chairman of the Assembly, for a fellowship meal.

On Friday, January 21, Metropolitan Tikhon hosted the hierarchs of the Assembly with their delegations at the Saint Nicholas Primatial Cathedral where Archpriest Valery Shemchuk and Deacon Peter Ilchuk served the Divine Liturgy. At the end of the service, His Beatitude warmly welcomed his brother bishops stating that, by the grace of God, they have assembled together to celebrate the Divine Liturgy, gathering as hierarchs, clergy and laity as the faithful people of God united in faith and hymn, and to proclaim the sacred gift of life.

Following the breakfast hosted by His Beatitude and the Cathedral community, the hierarchs and clergy joined many other Orthodox Christians from different parts of the country, including delegations from Saint Vladimir’s and Saint Tikhon’s Seminaries, for the Rally on the Mall.

On behalf of the Orthodox, Archbishop Elpidophoros offered the introductory remarks and prayer for the 2020 March for Life. Following the initial prayer, Metropolitan Tikhon served the Molieben and intoned Memory Eternal! for all the victims of abortion.