Source: Interfax-religion
Natalya Mihailova | 11 February 2016
Moscow, February 11, Interfax - A meeting between Patriarch Kirill of Moscow and All Russia and Pope Francis, which is expected to take place in Havana on Friday, will continue for approximately three hours, a source in the Moscow Patriarchate told Interfax-Religion. 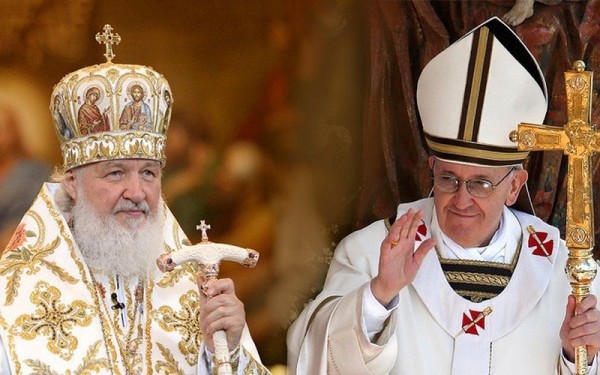 Their meeting at Havana’s International Airport is expected to begin at around 2:15 p.m. local time. The public part of the meeting will continue for the first 15 minutes.

At the end of the meeting, Patriarch Kirill and Pope Francis will exchange gifts and will sign a joint declaration, after which they will give a short speech to the press.

Approximately 30 minutes before his meeting with the pope, Patriarch Kirill will hold talks with Archbishop of Havana Cardinal Jaime Lucas Ortega y Alamino at Havana’s airport.

On February 13, the head of the Russian Orthodox Church is expected to meet with Cardinal Kurt Koch, head of the Pontifical Council for Christian Unity.

It will be the first meeting in history between the Moscow patriarch and the pope. This issue has been on the agenda of relations between the two Churches for almost 20 years. Pope Francis said a few days ago that the upcoming meeting has been prepared in secrecy for two years.

The persecution of Christians is expected to dominate the agenda for the meeting. In light of the situation in the Middle East and Africa, the two Churches have decided to put aside their existing disagreements and unite their efforts in order to save the Christians from genocide. The patriarch and the pope are also expected to discuss the abandonment of Christian values, which can be observed in Europe today.

The fact that Patriarch Kirill heads the largest one of the 15 local Orthodox Churches will add a special meaning to this historic event, which will be a meeting between the two most prominent leaders of the Christian world. It is also important that this meeting will be held amid existing sanctions with regard to Russia, the Russian operation in Syria, as well as ahead of a Pan-Orthodox Council in Cyprus in June.