Source: DECR
Natalya Mihailova | 11 January 2017
On January 10, with the blessing of His Holiness Patriarch Kirill of Moscow and All Russia, the memorial Divine Liturgy was celebrated in the Russian embassy with the prayer for the repose of the head of this diplomatic mission Russia’s Hero Andrey Karlov. 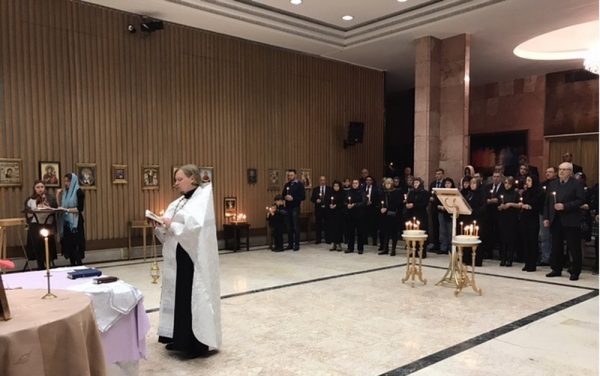 The Rev. Ilia Boyarsky, rector of the church of the Twelve Apostles-at-Khovrino in Moscow, presided. Diplomats with their families could partake of the Holy Gifts of Christ. After the liturgy, Father Iliya celebrated the Service for the Departed Servant of God Andrey.

Ambassador Andrey Karlov was assassinated on December 19, 2016, by a terrorist during the opening of an exhibition at the Modern Arts Center in Ankara.

Praying at the memorial service was the deceased’ widow Marina Karlova and members of his family, as well as staff members of the Russian embassy and their families. The singing was done by the choir of the local Orthodox community.

On the previous night, Father Iliya Boyarsky also celebrated Parastasis for the deceased at the Russian diplomatic mission in Ankara.