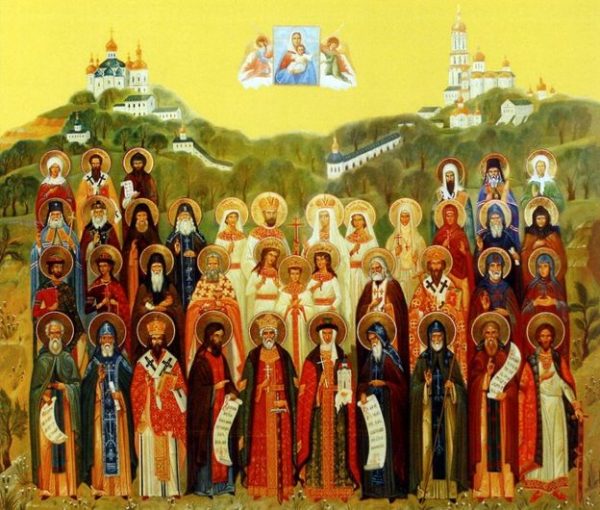 In my sermon last week on All Saints Sunday, I explained that if on Pentecost we celebrated the sending to the Church of the Holy Spirit, then on the Sunday after we celebrate the natural and logical outcome of receiving the Holy Spirit, which is that through struggle, with God’s help, Christians can become sanctified and become holy, or saints.

Today in our land we Orthodox celebrate the memory of all the saints who have shone forth in America. We remember St. Herman, the missionary monk who struggled in ascetic labors on Spruce Island in Alaska and attracted thousands of native Aleutian Americans to embrace the Orthodox Christian faith. How did he do it? He embodied and personified the words of St. Seraphim of Sarov — “Acquire the Spirit of peace and a thousand souls around you will be saved.”

We remember St. Innocent, the first Orthodox bishop in America, who created a written alphabet for the Tlingit Aleutian Americans, much the same way centuries before Saints Cyril and Methodius created a written alphabet for our forefathers in the Slavic lands when they were evangelized. Our Holy Father Innocent wrote a classic introduction to Orthodoxy for his missionary flock called “Indication of the Way Into the Kingdom of Heaven”(1) which is read not only by potential converts but even cradle Orthodox who want to learn more about their Orthodox Christian faith.

We remember the Holy Hierarch Nikolai of Zica, a gifted theological writer and orator who was known as the new John Chrysostom. He was an apostle and missionary to America and taught at St. Tikhon’s Seminary and St. Vladimir’s Seminary, leaving us a wealth of inspiring sermons and writings through which he posthumously continues to educate and evangelize.

We remember St. Alexis of Wilkes-Barre, who emigrated as a widowed Uniate priest from his native Hungary and was consequently maltreated and rejected by his Roman Catholic bishop in America who did not even consider him to be a priest. Having suffered this abuse, he led his huge flock of 20,000 Uniates into the Orthodox Church and can be credited with being responsible for Pennsylvania and its environs becoming a major center of Orthodoxy in America.

Lastly I will mention St. John of Shanghai and San Francisco, whose incorrupt relics can be venerated today in his cathedral in San Francisco. A glimpse of St. John’s great sanctity is revealed in a fragment from a letter written by his spiritual father, the famous theologian and Churchman Metropolitan Anthony Khrapovitsky, which says, “In my place, I am sending you, as my soul, my own heart, Vladika John. In our times of worldwide spiritual weakening, this frail little man, well-nigh a child in appearance, comes forth as a miracle of ascetic steadfastness and strictness.”(2)

We also remember today all the saints of Russia, from the Passion-bearers Prince Boris and Prince Gleb who meekly surrendered their lives without resistance when their elder brother had them murdered because he considered them to be political rivals, to the contemporary New Martyrs and Confessors of Russia whose blood covers the entire Russian land, suffering at the hands of the atheist Bolshevik and Communist regime.

In 1979 the theme of Orthodox Education Day at St. Vladimir’s Seminary was “Apostleship and America” as personified by St. Innocent of Moscow, Apostle to America. In the introduction of the booklet produced for that day, the Dean, Fr. Alexander Schmemann wrote: “To comment on a saint is not only to glorify his achievements and his personal growth in the grace of the Holy Spirit. In every saint, God challenges us in our own life, our own ministry, our own vision.”

Fr. Alexander continued, “The gift of apostleship is bestowed upon each member of the Church on the day of his Baptism and Chrismation. If we call our Church “apostolic” it is because She is sent, “apostle” meaning “sent by God.” It is because She is sent in Her totality, and this means in all Her members, into the world to preach the Gospel of Christ, to manifest His presence, to fulfill the salvation which He accomplished. In this sense, we all are apostolic and apostles. We all carry the responsibility for the apostolicity of the Church.”

Fr. Alexander’s concluding words to that introduction are just as relevant today as they were forty-one years ago. If Father Alexander were able to speak about today’s celebration of All Saints of America, he might say, “Let our celebration today of All Saints of America be a day of our own rededication to our apostleship. Let our joy at glorifying God in our commemoration of all the saints who have shone forth in the American land be the source of a new energy, a new desire to serve God and His Church in the darkness, anxieties and conflicts of our world today. O All Saints of America and Russia, pray to God for us!”
Amen.

1. “Indication of the Way Into the Kingdom of Heaven,” Holy Trinity Monastery, Jordanville, NY, 2013.