Met. Seraphim of Piraeus: Ukraine is Playing a Geopolitical Game between NATO and Russia 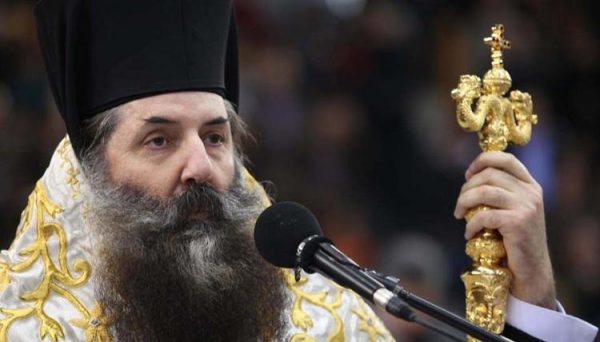 The Church must not be used for the implementation of political plans, His Eminence Metropolitan Seraphim of Piraeus, one of the staunchest and most respected hierarchs of the Greek Orthodox Church commented in a recent interview on Kontra TV’s “On the Press.”

As Romfea reports, His Eminence believes that the Ukrainian government is trying to do just that, playing a geopolitical game between Russia and NATO.

Met. Seraphim of Piraeus is not the only Greek hierarch to speak out lately. His Eminence Metropolitan of Seraphim of Kythira recently addressed His All-Holiness Patriarch Bartholomew, calling on him to repent of his dealings with the Ukrainian schismatics.

Asked about the ongoing controversy between the Ecumenical and Moscow Patriarchates, in which the former has uncanonically appointed exarch bishops in the latter’s territory, Met. Seraphim of Piraeus noted that it is “a complex, multifaceted issue that concerns the entire Orthodox Church.”

Emphasizing that the Church should not be used as a nationalistic tool, he emphasized that “the Church is the people of God who are moving in time towards the Kingdom of God, and that is why ethno-phyletism is a heresy.”

“Therefore, we are talking not about national Churches, but about the people of God, the Church, which includes everyone: Russians, Greeks, Bulgarians, Serbians, and those who accept faith in Jesus Christ,” His Eminence affirmed

His Eminence addressed the Ukrainian government: “You are playing a terrible geopolitical and geostrategic game between NATO and the Russian Federation, so understand that these things cannot be used as tools in the Church.”

Likewise, the Holy Synod of the Polish Orthodox Church declared on May 9: “There are certain schismatic groups in Ukraine which must first repent and return to the canonical Church. Only then can we discuss the issue of providing autocephaly… We must not be led by the political climate in questions of dogma and the canons.”

His Beatitude Metropolitan Rostislav of the Czech Lands and Slovakia has also called upon Ukrainian politicians to cease interfering in ecclesiastical affairs.