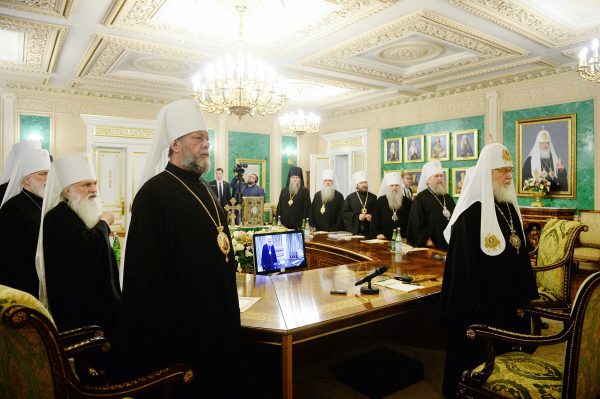 On 14 September 2018, at the Patriarchal and Synodal residence in St. Daniel’s Monastery in Moscow, the Holy Synod of the Russian Orthodox Church held an extraordinary session.

Summoned for the winter session (September-February) are Metropolitan Luka of Zaporozhye and Melitopol, Metropolitan Sergy of Barnaul and Altai, Bishop Lazar of Narva and Prichudye, Bishop Veniamin of Rybinsk and Danilov, and Bishop Nikolai of Nakhodka and Preobrazheniye.

His Holiness Patriarch Kirill of Moscow and All Russia opened the meeting, saying:

“Today we have on our agenda one item pertaining to the implementation of the decision of the Patriarchate of Constantinople to send the so-called “exarchs” to Ukraine. On 8 September, our Synod made a statement concerning the decision taken by the Synod of the Patriarchate of Constantinople to send these representatives, and we have received reliable information that they arrived in Ukraine and set to work.”

For health reasons His Beatitude Metropolitan Onufry of Kiev and All Ukraine could not attend the session. A video conference was organized, during which Metropolitan Onufry informed the members of the Synod of the situation in Ukraine after the appointment of the two representatives by the Patriarchate of Constantinople.

“It is true that both so-called “exarchs” of the Patriarchate of Constantinople have arrived in Ukraine,” His Beatitude Metropolitan Onufry said, “One was assigned to conduct negotiations with the party of the so-called “patriarch” Philaret, and the other – with the party of “metropolitan” Makary, head of the “Ukrainian autocephalous orthodox church.”

“We have not met with them and have no intention to meet, because they came here without our blessing. As representatives of the canonical Church in Ukraine, we will not communicate with them. We will see how the situation will unfold,” Metropolitan Onufry added.

Based on the information received from Metropolitan Onufry, the members of the Synod will take decisions pertaining to this matter.

Greeting His Beatitude Metropolitan Onufry, His Holiness Patriarch Kirill expressed his hope that the supreme authority of the Ukrainian Orthodox Church would “continue to pursue the only right path of carrying out its ministry in accordance with the canons of the Orthodox Church.”

“The situation caused by the appointment of the so-called “exarchs” is mirroring the situation back in the 1920s, caused by the actions of the Patriarch of Constantinople. At the time our Church, led by His Holiness Patriarch Tikhon, was in the most difficult circumstances,” the Primate of the Russian Church said, “The Patriarch was under the tremendous pressure from the authorities, while the schismatic organization inspired by the authorities – the Renovationist “church” – was gaining strength. Then Patriarch Gregory VII of Constantinople made a decision to send the so-called “commission” to Moscow, allegedly at the request of some Orthodox believers. Of course, the Russian Orthodox Church sent no such requests to Patriarch Gregory VII. Those requests most likely came from the schismatics – Renovationists. And Patriarch Tikhon wrote a very clear, canonically justified letter, in which he protested against sending by another Local Church, in the uncanonical way, some “commission” to the canonical territory of the Russian Orthodox Church which he headed. We know in what difficult situation Patriarch Tikhon was at the time. Although the Patriarch was almost imprisoned, he expressed his position in a courageous and clear way.”

“Since the current situation in Ukraine is, as I have said, mirroring what was going on in the early 20thcentury, we must pursue the path that was courageously shown to us by His Holiness Patriarch Tikhon in the hardest period for our Church. This path is the only right and canonically justified one,” His Holiness Patriarch Kirill said in conclusion.