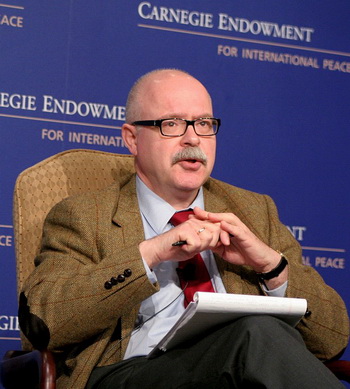 Director of the Moscow Carnegie Center Dmitry Trenin believes that a new schism of the Orthodox Church in Ukraine may be even more dangerous for Russia than NATO expansion to the East.

“In the early 1990-s we have already seen struggle for churches and parishes. It may start anew, opening a new front in multilevel struggle. Reality of church struggle (…) can really be more terrifying than a ghost of NATO,” Trenin writes in his article in the Kommersant daily.

According to him, Patriarch Bartholomew’s decision to appoint two exarchs in Kiev for preparing autocephaly “has evident geopolitical content: he openly supported one of the sides participating in the more extensive conflict.” Thus, Trenin believes, the “hybrid war between Russia and the USA, which lasts for five years, and has Ukraine among its platforms from the very start, received one more: church dimension.”

The expert expressed an opinion that church schisms unlike political disputes and even wars, “last for centuries and often are never healed”, but they can be “transferred to political sphere, initiate conflicts and mass violence.”

According to the director of Carnegie Center, the coming decision of Constantinople aims “at prevention of factual leadership of the Russian Orthodox Church in world Orthodoxy” even if it is obtained at the cost of a church schism.”

Most viewed articles
First Church in the Antiochian Archdiocese Named for St. Xenia of St. Petersburg Prepares for Feast Day284
Patriarch Kirill: Not Only People, But Churches Too, Can Depart from God160
My World’s Different104
Patriarch Porfirije of the Serbia: Our Position on the Church Issue in Ukraine Has Not Changed89
Brooklyn Street Co-Named for Antiochian Pastor Who Served a Half Century There87
Thoughts on Theophany and Revelation76
Metropolitan Hilarion: the Church and traditional confessions have done everything possible to improve the situation in Kazakhstan74
A Christianity of the Catacombs63
Archbishop Makarios of Australia: ” the Great privilege of the Orthodox Church is that we live in communion”20
4-400×6001
Most popular authors
Pravmir.com team627
Protopresbyter Themistoklis Mourtzanos104
Peter Samore87
Elissa Bjeletich76
Archpriest Lawrence Farley63