Source: Detroit Free Press
Coptic Orthodox Christians in metro Detroit mourn the deaths of 21 Copts beheaded in Libya by ISIS. The Rev. Mina Essak of Troy says they will "reach the highest levels of martyrs in heaven."
Natalya Mihailova | 17 February 2015
When Mark Michail of Birmingham heard that 21 Egyptian Christians had been beheaded on a Libyan shore, "the first thing I felt was utter sadness," he said Monday. "They were basically butchered for their religious beliefs." 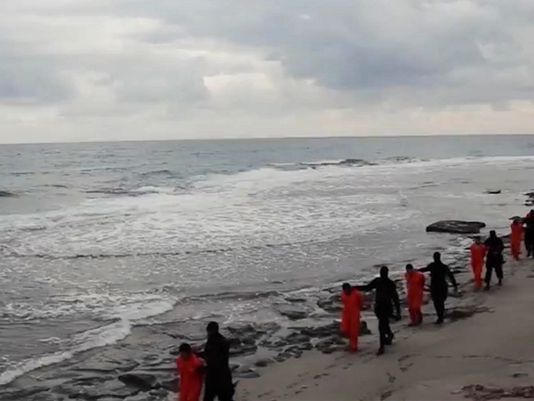 This image made from a video released Sunday Feb. 15, 2015 by militants in Libya claiming loyalty to the Islamic State group purportedly shows Egyptian Coptic Christians in orange jumpsuits being led along a beach, each accompanied by a masked militant. Later in the video, the men are made to kneel and one militant addresses the camera in English before the men are simultaneously beheaded. The Associated Press could not immediately independently verify the video. (AP Photo)(Photo: AP)

It’s a feeling felt by many in metro Detroit’s Coptic community, who were devastated to find out over the weekend that ISIS had murdered 21 Coptic Christians in Libya, where the Christians had migrated for jobs. Copts are native Egyptian Christians, one of the oldest Christian communities in the world.

“These are young guys from small villages just wanting to work to provide for their families,” Michail said of the victims. “They weren’t there to cause any problems. To have them butchered like that is very sad.”

At St. Mark Coptic Orthodox Church in Troy, religious leader the Rev. Mina Essak said that while the deaths were sad, the 21 men will “reach the highest levels of martyrs in heaven. … It’s a mixed feeling between tears and rejoicing because they are going up to heaven.”

They “sacrificed their life for Christ, and did not deny him,” Essak said. “After their capture, they spent weeks being tortured and probably pressured to deny Christ” and convert to Islam.

“They were steadfast in their faith,” he said. “They were slaughtered just like animals.”

While the beheadings were shocking, Essak said Copts are used to this type of persecution.

“For us, it’s a continuation of history,” he said. “It started with the Lord on the cross, and in the early centuries, when Christians were dealt with like this. Egypt has almost 1 million martyrs” for the Christian faith.

The church actually “flourishes when such a thing happens, getting stronger,” he said.

About 3,400 Egyptian-Americans live in Michigan, both Christian and Muslim, according to U.S. Census figures. There are roughly 850 Coptic Christian families in the state, said Michail. The biggest church in metro Detroit is St. Mark, established in the 1970s, with four other Egyptian churches in Grand Rapids, Ann Arbor, Lansing, and Detroit. Census figures show there are about 220,000 Americans overall with roots in Egypt, with sizable Coptic communities in New Jersey and California.

The head of North American branch of the Coptic Orthodox Church, His Grace Bishop Karas, said Monday: “Our community is devastated by the brutal execution of 21 Coptic Christians on Libya’s shore. … These victims have left behind wives, parents, children, friends, coworkers and neighbors.”

Pope Francis also expressed solidarity with the victims, saying Monday, “They were killed simply for the fact that they were Christians.”

Most viewed articles
Metropolitan Hilarion of Eastern America and New York to Be Buried in Jordanville on May 22220
Patriarch Kirill: The Peoples of Russia and Ukraine Have No Interest in the Conflict186
Communion restored between the Serbian Orthodox Church and the Macedonian Orthodox Church – Ohrid Archbishopric133
Metropolitan Hilarion of Eastern America and New York Reposes in the Lord129
What Do We Celebrate at Mid-Pentecost?110
Family Life and Spiritual Warfare74
Celebrating 100 Years with Paschal Joy71
Patriarch of Serbia to Concelebrate with Archbishop Stephen of Ohrid50
Concelebration of Divine Liturgy by the Serbian Patriarch and Archbishop of Ohrid in Belgrade (VIDEO)44
China’s Internet Clampdown Is Step Closer to ‘Cancelling Christianity’40
Most popular authors
Pravmir.com team762
Ioannis Foundoulis110
Archpriest Michael Gillis74
Priest Luke A. Veronis71
Donna Birrell40