Metropolitan Anthony: To Have Such a Primate is Grace of God for Us

Source: Union of Orthodox Journalists
His Beatitude Onuphry is a folk shepherd. In fact, he fulfills the call commanded by the apostle Paul: “Rejoice with those who rejoice; mourn with those who mourn”.
Metropolitan Anthony (Pakanich) | 17 August 2019 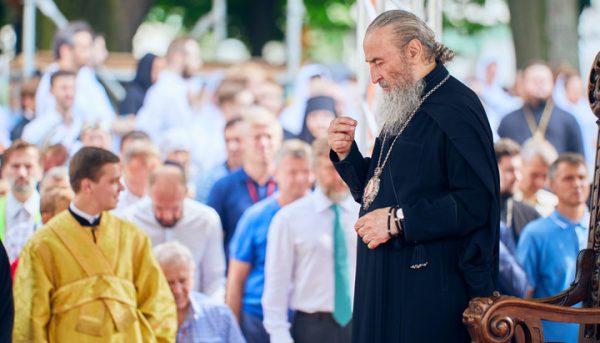 The election of His Beatitude Onuphry in such difficult times for the Church is not by chance, it is the grace of God, said Metropolitan Anthony to the Pravlife resource on the eve of the enthronement anniversary of the Ukrainian Orthodox Church Primate.

“I’m not afraid to overestimate the role of His Beatitude Metropolitan Onuphry in the history of the Ukrainian Orthodox Church,” said His Eminence. “Over the five years of his ministry, the Church has passed and is going through the crucible of persecution, trials, slander, betrayal. More than once we all became convinced in practice that it was not by chance that His Beatitude leads our Church precisely at this time. This is the grace of God. His steadfastness in faith, allegiance to the Church and the commandments of God, equal treatment of all people regardless of their position and status serve as an example of high spirit, while the Metropolitan himself is a living authority for all people, even for the enemies of the Church.”

Metropolitan Anthony believes that the unity of the UOC believers became possible precisely thanks to the personality of the UOC Primate:

“His Beatitude is a good pastor of the people. In the most difficult times, believers who trust him, witnessing his calmness and firmness, were not afraid to defend their temples, their beliefs and faith. In fact, he fulfills the call commanded by the Apostle Paul: “Rejoice with those who rejoice; mourn with those who mourn” (Rom. 12:15).

I believe that the most difficult times, when it was necessary to literally hold the fort shoulder to shoulder, are gone and the time of preaching Christ by each of us with our own life according to the commandments are ahead. The history of the Church is cyclical: times of persecution and peace alternate. But peacetime is not a reason to relax but to constantly maintain good spirits, as the Savior bequeathed, in order to withstand the times of trial with God’s help.”

Metropolitan Anthony (Pakanich): Who Can We Trust? The Main Criterion

We were given an unshakable criterion by the Savior: the tree is known by its fruit.

Why Doesn’t God Give Me What I Want?

People often ask why God doesn't give them what they ask Him for in their prayers?