Metropolitan Onuphry Celebrates the 6th Anniversary of His Enthronement

Primates and hierarchs of Local Orthodox Churches congratulated His Beatitude Metropolitan Onuphry on the 6th anniversary of his enthronement.
Pravmir.com team | 18 August 2020 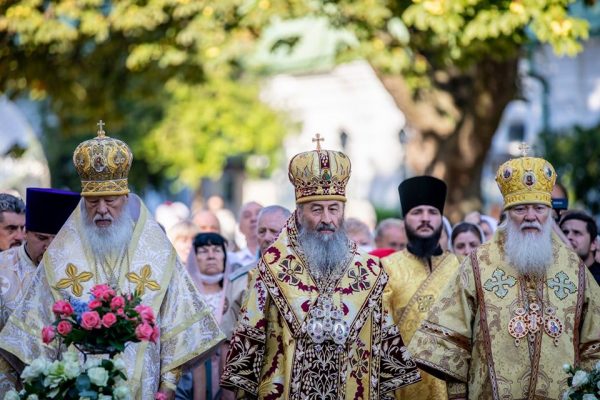 His Beatitude Metropolitan Onuphry, Primate of the Ukrainian Orthodox Church, celebrated the sixth anniversary of his enthronement on August 17, 2020. A festive divine service took place at the square near the Dormition Cathedral of the Kiev Pechersk Lavra, reports the Information and Education Department of the UOC.

His Beatitude Metropolitan Onuphry, Primate of the Ukrainian Orthodox Church, presided over the Divine Liturgy. He was concelebrated by permanent members of the Holy Synod of the UOC, Metropolitan Agafangel of Odessa and Izmail, Metropolitan Mark of Khust and Vinogradov, Metropolitan Hilarion of Donetsk and Mariupol, Metropolitan Theodore of Kamenets-Podolsk and Gorodok, Metropolitan Pavel of Vyshgorod and Chernobyl, Metropolitan Anthony of Borispol and Brovary, as well as bishops and numerous clergy.

His Beatitude Metropolitan Onuphriy thanked everyone for their congratulations and addressed the audience with the following speech:

“On this day of the sixth [anniversary] of the ministry to which the Lord has appointed me, I want to thank God for that God has been merciful to us – to me a sinner and to all of you. I think it makes no sense to tell what happened during this period, because you all experienced it. We also experienced it with our heart, soul, mind, and with all the cells of our being. We have experienced these tragedies, difficulties, schisms, temptations, persecutions, and oppression that the Lord presented us with: because this is also a gift from God. If they had not persecuted us, if they had not oppressed us, then we would have probably wrapped ourselves in our cocoon and thus probably would have disappeared. However, the Lord tears off this shell of prosperity from us and makes us pray, repent, work, and try to correct ourselves. All the trials that the Lord allows to happen are for the correction of our personal life. This is the first thing. Each person must correct themselves in these tests. This will be the right attitude to the sorrows and difficulties that we meet on the path of earthly life.”