Source: DECR
Natalya Mihailova | 21 April 2018
On 19 April 2018, the Verkhovna Rada of Ukraine endorsed an initiative of President Petro Poroshenko concerning an appeal to the Patriarch of Constantinople for the creation of the autocephalous Church in Ukraine. Interfax-Religion web portal asked Metropolitan Hilarion of Volokolamsk, chairman of the Moscow Patriarchate’s Department for External Church Relations, to present the position of the Russian Orthodox Church on this matter. 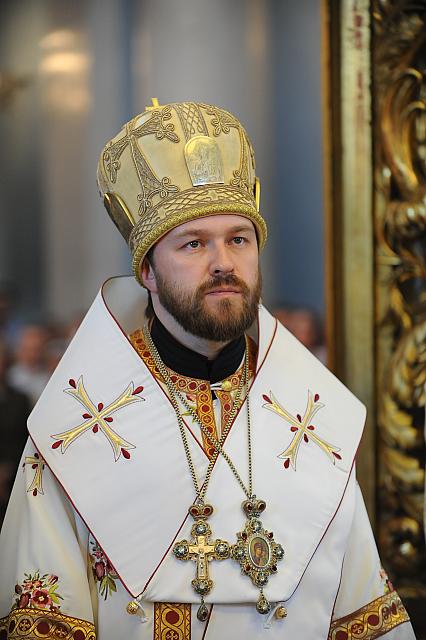 – The creation of an autocephalous Church is a process that cannot be initiated by secular authorities, because, as is well-known, the Church in present-day states is separated from the state, and the state must not manipulate the Church, be it in an election campaign or for any other political purposes.

The whole concept of the creation of one local Church in Ukraine, separated from the Russian Orthodox Church, is based on the idea that in an independent state there should be an independent Church. Had we decided to apply this principle, then the Church of Alexandria, for instance, should have been divided in over fifty parts, since it embraces all Africa, and Africa has more than fifty countries; the Church of Antioch should have been divided in several parts, just like the Church of Jerusalem, and so on. Only enemies of the Church benefit from such schemes and such ideas.

The schism in Ukraine occurred because the former Metropolitan of Kiev, Philaret Denisenko, decided to solve his own, personal problem by means of church schism. The problem was that he had been one of the candidates for the Moscow Patriarchal Throne, but the Local Council of the Russian Orthodox Church had elected another man to this post – the late Patriarch Alexy II. Philaret Denisenko nursed a grievance and upon his return to Ukraine set about working towards the creation of an independent Church. Later, at the Bishops’ Council of the Russian Orthodox Church, he promised to resign from the post of Metropolitan of Kiev. However, returning to Ukraine, he changed his mind, announced another decision, thus breaking the promise given to the hierarchs of the Russian Church, and initiated the church schism.

For almost quarter of a century, this church schism has gathered pace due to the support by secular authorities. Yet, it is still a schism. As for the legitimization of schism, there haven’t been such precedents in the history of the Church. There were precedents when some hierarchs, clergymen, laypeople, groups and organizations returned from schism through repentance, and it is the only way that the Orthodox Church can offer.

Certainly, we have recently heard of negotiations of the Ukrainian President Poroshenko with Patriarch Bartholomew of Constantinople. We have heard of the schismatics’ various initiatives, of trips to Phanar. We have heard of rich gifts brought there… We know all this, as well as many other things which I would not like to make public. At the same time, for many years we have heard a very firm position expressed by the Patriarch of Constantinople who has always said that he recognizes His Beatitude Metropolitan Onufry as the only head of the canonical Ukrainian Orthodox Church. And the Ukrainian Orthodox Church has no intention of severing relations with the Russian Orthodox Church.

We are one Church born in the Kiev, Dnieper baptismal font, and, of course, neither Patriarchate of Constantinople, nor any other Church can unilaterally proclaim autocephaly of this or that Church.

Therefore we believe that despite all the media fuss, this initiative will have the same fate, as the initiatives of the previous years, and we say again that the Ukrainian church problem can only be solved through canonical means.