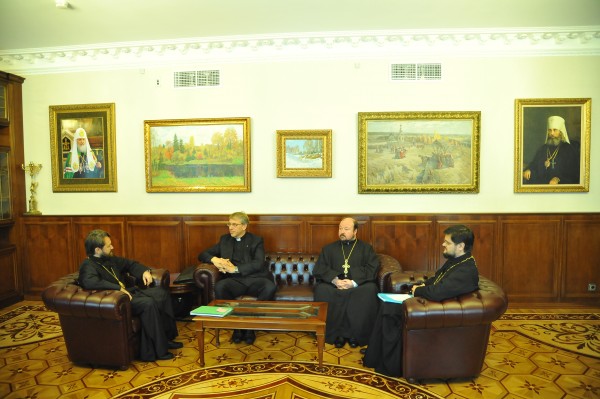 They were joined in the meeting, which took place at the Moscow Patriarchate’s Department for External Church Relations (DECR), by archpriest Mikhail Gundyaev, representative of the Moscow Patriarchate at the World Council of Churches and international organizations in Geneva, and hieromonk Stefan (Igumnov), DECR secretary for inter-Christian relations.

Discussed were inter-Christian relations and the current international situation. The situation in Ukraine was the main topic. Metropolitan Hilarion and Dr. Tveit talked with sorrow about numerous victims of the conflict in the south of the country and the dire humanitarian situation in the region. They underscored the necessity of a closer interaction of the Christian Churches for the overcoming of crisis in Ukraine.

Also discussed was the situation in the Middle East which has aggravated after the invigoration of the activity of the Islamic World group in the territory of Syria and Iraq. Opinions were exchanged on a possibility of common actions of the Christian Churches and international Christian organizations regarding the consequences of the Middle East crisis. The keeping of Christian presence in the region was noted as an extremely important task.

Dr. Tveit spoke about the recent events in the WCC, including the relief programme being realized together with the WHO for people in West Africa suffering of the Ebola epidemic.