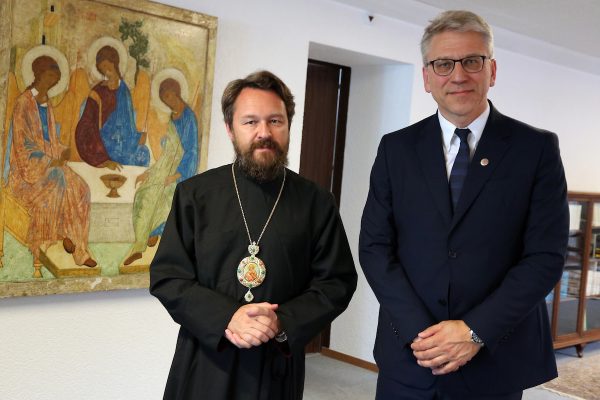 At the beginning of the meeting, Metropolitan Hilarion conveyed to the WCC General Secretary warm greetings from His Holiness Patriarch Kirill of Moscow and All Russia.

The DECR chairman told Rev. Dr Tveit about the plight of the canonical Ukrainian Orthodox Church caused by the unprecedented interference of the Ukrainian state in church affairs. The so-called “unification council” was being prepared and held against the background of unexampled pressure placed by representatives of the central and local authorities of Ukraine on hierarchs and clerics of the canonical Church. Soon after this “council” the Supreme Rada adopted and Ukrainian President Petro Poroshenko signed two discriminatory laws targeting the Ukrainian Orthodox Church. Despite the pressure, as well as the granting of the “Tomos of Autocephaly” by the Patriarchate of Constantinople to the new “church,” the vast majority of bishops, clergy and laypeople remained faithful to their Primate – Metropolitan Onufry of Kiev and All Ukraine. As Metropolitan Hilarion noted, so far not a single Local Orthodox Church has recognized this newly-institutioned church structure.

Metropolitan Hilarion thanked Dr Olav Fykse Tveit for the unchanging constructive position of the WCC on the situation of churches in Ukraine.

The General Secretary of the World Council of Churches assured the DECR chairman that the WCC continues to regard the Ukrainian Orthodox Church as the only universally recognized Church of Ukraine.

Dr Tveit also highlighted some major developments in the present-day life of the World Council of Churches, devoting special attention to the preparations for the WCC 11th Assembly due to take place in Karlsruhe, Germany, in September 2021. The theme of the Assembly will be “Christ’s love moves the world to reconciliation and unity.” The WCC General Secretary expressed his hope that representatives of the Russian Orthodox Church would take an active part in the preparation of the Assembly, especially by providing theological perspective on its main topic.

In this regard he shared with Metropolitan Hilarion his concern over the situation that arose in the Orthodox world following the actions taken by Patriarch Bartholomew of Constantinople in Ukraine and the severance of communion between the Russian Church and the Church of Constantinople. All this makes full-fledged participation of Orthodox Christians in the WCC’s work very difficult, Dr. Tveit noted and added that, according to its status, the World Council of Churches does not deem it possible to interfere in the internal life of its member churches, but strives to provide them with a neutral space for engaging in fruitful dialogue and resolving problems.

To conclude the meeting, Metropolitan Hilarion made an entry in the distinguished visitors’ book and expressed his hope for further fruitful cooperation between the Russian Orthodox Church and the WCC, especially in protecting Christians in today’s world.

That same day Metropolitan Hilarion gave an interview to the international journalists, close to the WCC, answering questions about the situation of the Church in Ukraine and the severance of Eucharistic communion between the Patriarchates of Moscow and Constantinople.