Metropolitan Hilarion Meets with a Representative of the Syrian Parliament 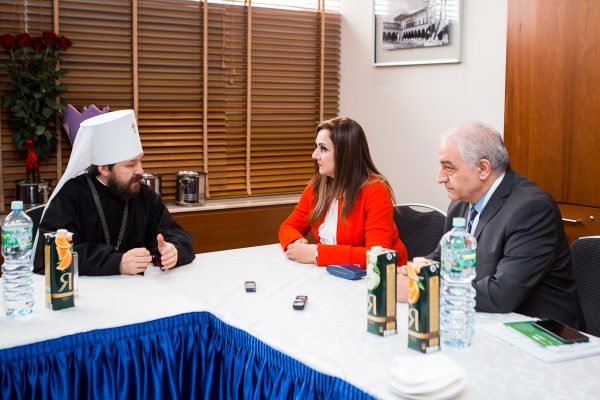 Metropolitan Hilarion of Volokolamsk, head of the Moscow Patriarchate department for external church relations (DECR), met with Ms Maria al-Betaar Shehadeh, a member of the Syrian Parliament, National Security Council and Russian-Syrian Friendship Committee, on sidelines of the Second National Inter-disciplinary Congress with international participation devoted to the theme ‘Physical and Rehabilitational Medicine in Paediatrics: Traditions and Innovations’.

The archpastor and Ms. Maria al-Bataar discussed the project for aid to children in the Middle East realized, with the blessing of His Holiness Patriarch Kirill of Moscow and All Russia, by the DECR with the participation of Poznanie and Linia Zhizni Charities and the Research-Practice Children’s Psycho-neurology Center of the Moscow Municipal Healthcare Department. His Eminence informed the Syrian MP about the current state of the project under which work is carried out with various Russian and Syrian partners, including the Church of Antioch, and about the plans for broadening the project.

Metropolitan Hilarion suggested that Syrian representatives offer the full range of problems to be solved through common efforts. It is necessary to have a clear idea of what tasks the planned rehabilitation center is to fulfill, His Eminence noted. He said that it should be understood that prosthesis and psychological aid demand different things.

On her part, Ms. Maria al-Betaar thanked the Russian Orthodox Church and Russian authorities for aid given to children affected by the war in Syria. She noted that in addition to hostilities, Syria is suffering from sanctions that affect the economy and life of the Syrian people. As a result of the sanctions, the country cannot purchase new medical equipment and even medicines and children nutrition. With new territories liberated with the help of the Russian Army, there appear new people who need help, she said.