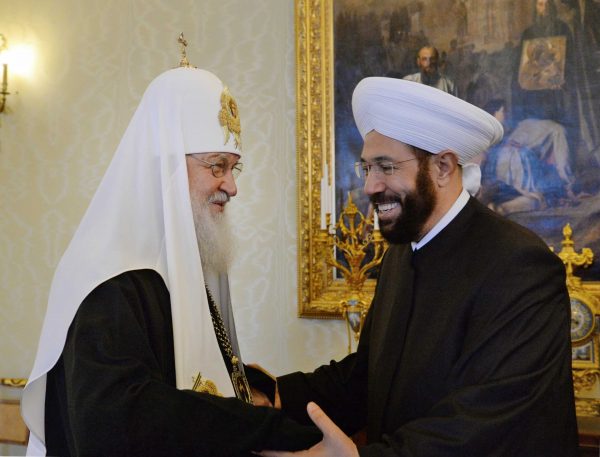 On September 18, 2018, His Holiness Kirill, Patriarch of Moscow and All Russia met with Sheikh Ahmad Badreddin Hassoun, Grand Mufti of Syria, at the patriarchal and synodal residence at the St. Daniel’s monastery in Moscow.

From the Syrian side, there were Mr. Riad Haddad, Ambassador Extraordinary and Plenipotentiary of the Arab Republic of Syria to Russia, Sheikh Abdulrahman Hassoun, assistant of the Grand Mufti, and Mr. Norfal Khalthoum, an interpreter.

Welcoming the high guest warmly Patriarch Kirill said in particular, ‘Since our latest meeting in 2014, many events have taken place. In the context of our bilateral relations, among the most important ones was the Russian Federation joining the struggle with terrorism in Syria’.

According to His Holiness, the initiative of the Russian State to join the struggle with terrorism in the territory of Syria has met with support on the part of the religious circles in Russia. ‘The Interreligious Council in Russia, which includes Orthodox Christians, Muslims and Jews spoke out as well in support of the struggle with terrorists including in the territory of Syria’, he noted, ‘by God’s mercy, the results of this struggle proved to be positive, and the most part of Syria has been liberated from terrorists, although there are still hotbeds of tension. But we hope that these hotbeds too will be supressed and peace and justice will be restored in the Syrian land’.

Continuing the talk, His Holiness expressed his opinion concerning the post-war restoration of a normal life in Syria, stressing the essential importance of preventing extremism. ‘Work is needed so that nobody and nowhere could use terrorist methods in the Syrian land to achieve their political ends. We believe it to be our fraternal duty, and I would like to underscore once again that this aid has been given both unilaterally by the Russian Orthodox Church and on the interreligious basis when both the Orthodox and Muslims from Russia sent together humanitarian supplies to your country. Among very good signs of our cooperation and interaction was that the humanitarian aid was distributed in both the territory of Orthodox churches in Syria and the territory of mosques.

‘I also appreciate your role in carrying out these actions’, His Holiness said addressing the ambassador. He said that he highly appreciated the advice given by the Grand Mufti of Syria to send humanitarian aid to Aleppo where it was essential.

Patriarch Kirill also said that the humanitarian action, which was organized by a Russian interreligious delegation, provoked ‘a strong irritation’ among terrorists, and a humanitarian aid station in Syria was subjected to shelling. ‘It was a dramatic moment’, he stressed, ‘On the other hand, terrorists showed their true face. They were very much irritated by the very fact that somebody gave humanitarian aid to their victims. Such a behavior of armed groups, who claim to be fighters for a bright future in Syria, should be reported to the broad public because it sheds light on the face of these people. They a not fighters for a bright future, they are terrorists who pursue their goals and use such disgusting means’.

The patriarch also mentioned another charitable initiative of the Russian Orthodox Church, namely, the treatment and rehabilitation of Syrian children in Russian clinics. He said that an experts’ group already took their first fight out to Lebanon to examine children from among Syrian refugees, who needed special treatment and then rehabilitation in Russia.

‘We noted with satisfaction that the National Syrian Dialogue Congress in Sochi was attended by some 90 representatives of the Islamic and Christian clergy from your country’, His Holiness continued, ‘We are ready to continue supporting the process of reconciliation between various representatives of the Syrian society. And it is very important that this process should involve representatives of the clergy and the faithful, both Muslims and Orthodox Christians. We know that terrorists often use religious arguments for carrying out their lawless actions. Certainly, it is a distortion of fundamental principles of Islamic religion. Therefore, it is the healthy forces representing Islam that should oppose them in the first place on the level of thinking. And Christians should also take part in it, of course, because there is a large Christian community in Syria’.

During the meeting, His Holiness also recalled his visit to Syria in 2012 when disturbances had already started there. He pointed to the great level of Syria’s development, good social atmosphere and high level of mutual respect among religious communities.

Before greeting the Primate of the Russian Orthodox Church, the Grand Mufti of Syria proposed to honour the memory of the military who became victims of the crush of an Il-20 aircraft in the Syrian sky on September 17, 2018.

Then Sheikh Ahmad Badreddim Hassoun thanked His Holiness on behalf of Syrian President Bashar Assad and the whole Syrian people for the aid which the Russian Orthodox Church has given to victims in Syria, ‘The support of the Russian Church is more than a mere aid. The humanitarian actions were carried out for each person regardless of his religious affiliation, and each Syrian citizen could feel it’ he said.

The Grand Mufti of Syria also emphasized that the conflict in Syria presents ‘a lesson and warning about a danger to the whole world’. ‘Had the terrorists succeeded in completing what they initiated, this fire would have spread to the whole world’, the Grand Mufti stated pointing out the importance of joint participation of religious leaders of the cause of eradicating and preventing extremism. He said that the extremist propaganda often succeeds because of people’s ignorance about religious issues. He also described the migration of Christians from the Middle East – a land that has traditionally been inhabited by Christians – as one of the most dangerous phenomena.

In conclusion, the sides exchanged tokens of the meeting.