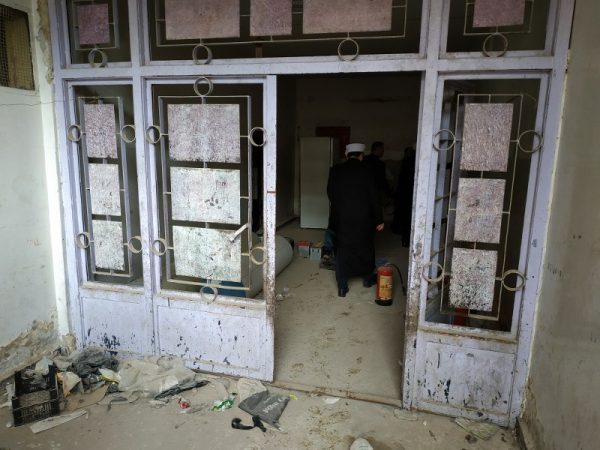 On March 30, a delegation of the Interreligious Working Group for aid to the Syrian population under the Presidential Council for Cooperation with Religious Organizations visited the Barzeh neighbourhood in Damascus in which there is a general education school damaged by the military actions. It has been chosen as the first target of the project for restoration of the Syrian social infrastructure to be realized by the Working Group.

This project has been initiated by His Holiness Patriarch Kirill of Moscow and All Russia. It was discussed and negotiated during the visit made by Metropolitan Hilarion to Damascus in November 2018 and the High-Level Interreligious Conference held with his participation in the Syrian capital city. It was approved by the leaders of major Christian and Muslim communities in Russia. The task to implement was given to the Interreligious Working Group for Aid to the Syrian Population under the Presidential Council for Cooperation with Religious Associations.

The Russian delegation together with the Christian and Muslim clergy in Syria inspected the territory and the ruined classrooms of the school and defined the field of work. A part this work had already begun some time before the arrival of the delegation as part of the management of the first tranche of the funds obtained by the Working Group for the project. Taking part in the inspection were leaders of the Damascus education department and representatives of the Syrian Ministry of Education.

The school, which used to be attended by over one thousand children, is located in a densely populated part of Damascus that was made a target of the military actions and was considerably destroyed. For a long time eastern Barzeh was in the hands of terrorists, and the children there were subjected to ideological indoctrination in the militants’ special centers. The children, who lived in the western part of the neighbourhood, witnessed the horrors of war and violence and received deep psychological traumas. Today, these and other children have no opportunity for being properly educated and for this reason the problem of restoration of the school in their neighbourhood has become so acute. After talks with local people and future schoolchildren of this school, the Working Group came to conclusion that the restoration work of high quality should be carried out quickly so that children could begin classes in the new school in the new academic year.

The matter has an important social dimension since only a systemic education can remove the consequences of the impact made purposefully on children’s consciousness by ideologues of terrorism. And. on the contrary, a lack of opportunity for children to study and their forced street life creates a favourable environment for this impact to become even deeper.

In this connection, Christian and Muslim communities in Russia, at a request from Syrian brothers and sisters, appeal today to organizations concerned to join this project as having a decisive importance for establishing a lasting peace in Syria and liberating it from the risk of terrorist threat in the future.

The funds for carrying out this work are transferred to the account of the Interreligious Foundation for Promoting the Realization of Joint Humanitarian Projects, the bank details of which are given below.

On March 31, the interreligious delegation from Russia met with the Syrian Minister of Awqafs, Sheikh Mohammad Abdul-Sattar al-Sayyed, who expressed gratitude on behalf of all the Syrian people for the aid given by Christian and Muslim believers in Russia. During the meeting, the sides pointed to the importance of the research-practice conference held a week earlier in Moscow on the initiative of the Assembly of the Muslims in Russia under the theme ‘The ways of achieving an interreligious peace: the role of theologians, diplomats and public leaders’, which was attended by a representative delegation of Muslims and Christians from Syria led by the Minister of Aqwaf.

On the same day, the Working Group delegation met with the Russian Ambassador to Syria, A. Yefimov, who said that the projects realized by the group have not only humanitarian but also important peacemaking dimension since it constitutes a powerful incentive for strengthening interreligious cooperation in Syria itself. On behalf of the delegation, Hieromonk Stephan and Mufti Albir Krganov thanked the Russian embassy for assistance in organizing and conducting humanitarian actions.

For payments in roubles

Purpose of the payment:

“For the restoration of a school in Syria”