Source: DECR
Natalya Mihailova | 24 April 2015
April 22, 2015 – His Holiness Patriarch Kirill of Moscow and All Russia met with the Secretary General of the World Council of Churches (WCC), the Rev. Dr. Olav Fykse Tveit. 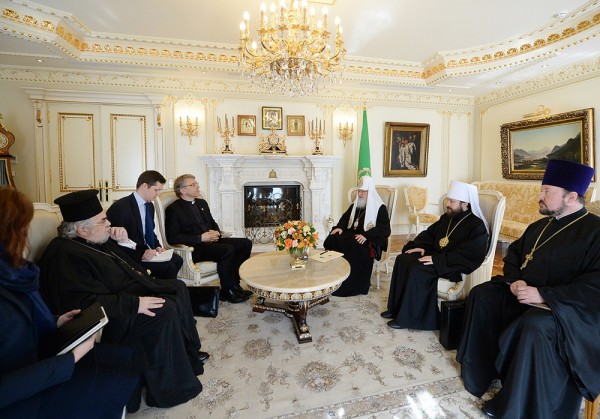 Participating in the meeting at St. Daniel’s Monastery were also Metropolitan Hilarion of Volokolamsk, head of the Moscow Patriarchate department for external church relations, Metropolitan Gennadios of Sassima (Patriarchate of Constantinople), Archpriest Mikhail Gundyaev, Moscow Patriarchate representative to the WCC and international organizations in Geneva, and Ms Marianna Eidersten, director of the WCC communication service.

Welcoming the guests, Patriarch Kirill said, ‘I am delighted at this opportunity to talk with you about the problems which disturb very many Christians’. He raised in particular the problem of the Christians minority in the Middle East and North Africa. ‘Almost every day I receive information which cannot but wounds my heart’, he said. He mentioned the destruction of all the Christian churches in Mosul, Iraq, in which until recently there were 45 churches. Local Christians either have left those places or were subjected to persecution or killed. Forty hundred churches have been destroyed in Syria. Hundreds of thousands Christians have had to leave the country. Terrible events are going on in Libya, with reports of new killings and abductions of Christians and the attacks on Christian churches coming in recent years. In February, over twenty faithful of the Coptic Church were brutally killed, and a few days ago reports came about the brutal execution of thirty Ethiopian Christians. 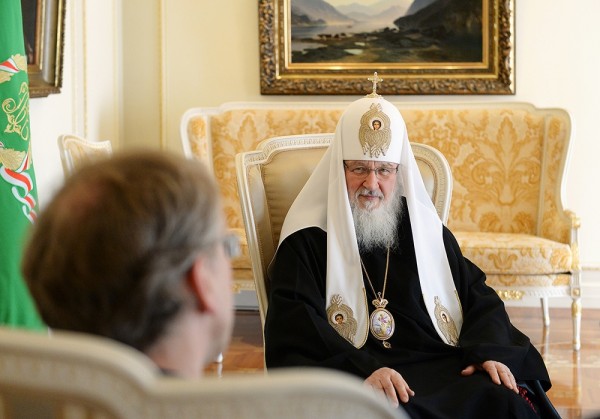 ‘We keep in contact with the Russian Ministry of Foreign Affairs and representatives of other countries’, His Holiness continued, ‘Every time when I meet with heads of states and governments I raise this problem’.

His Holiness was pleased to note that the UN Human Rights Council, at the initiative of Russia, the Vatican and Lebanon, adopted on the sidelines of the 28th session of the UN Human Rights Council a statement ‘In Support of the Human Rights of Christians and Other Communities, Especially in the Middle East’. The document was signed by 65 countries. His Holiness still expressed bewilderment over the fact that this problem is so weakly voiced on international level.

‘You are certainly aware of the documents adopted by the UN on anti-Semitism and Islamophobia. We believe the time has come to speak of Christianophobia as well. The World Council of Churches could now play a very important role speaking on behalf of over three hundred member-churches and articulating a common stand on this problem before appropriate secular authorities and international organizations. I would like to thank you for what you have already done in this respect, but I think the time has come for us all to work still more energetically’, the patriarch said. He also noted that the position taken on Christianophobia by the Russian Orthodox Church is fully shared by the Holy See. 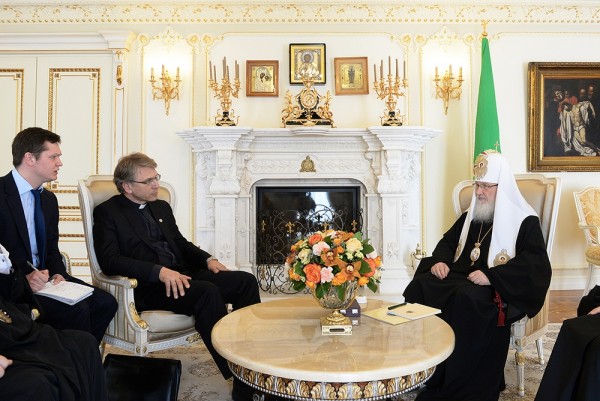 In his response, Dr. Tveit said that he remembered their previous meeting and that he informed the WCC leaders about it. ‘We have an opportunity to think how to begin solving the problem you have raised and the problems we discussed last time when we spoke, in particular, about the situation in Ukraine’.

The WCC Secretary General called the meeting an excellent opportunity for discussing important issues concerning, among others, the situation of the Christian population in various parts of the world.

He made a special mention of the fact that this year marks the centenary of the Armenian genocide and several other minorities in the Ottoman Empire. Many of the victims were Christian believers. ‘It seems it me that it gives us an opportunity to look at that tragedy not only through the prism of history but also in the context of what is happening in our days. These developments allow us not only to attract public attention to what is happening to Christians throughout the world; it also reminds us of our common responsibility for the support of human dignity’.

Mr Tveit spoke of the steps made by the World Council of Church to improve the situation of Christians in various countries. ‘The destruction of a state and the abolition of law and order can lead to serious victims, as we have already witnessed it in Syria, Iraq and Libya. Therefore, as Christians we should think about our brothers and sisters and think how we can call heads of states and governments to promote the establishment of peace’, he said.

Metropolitan Gennadios of Sassima, vice-moderator of the WCC Central Committee, extended Easter greeting to Patriarch Kirill and conveyed him cordial greetings from the Primate of the Orthodox Church of Constantinople, His Holiness Patriarch Bartholomew. He said that the Ecumenical Patriarchate, the Patriarch of Constantinople and the Synod were closely following the situation in the Middle East, North Africa, Pakistan and Iraq. ‘Just as other Churches and church leaders, we state our solidarity and unity in prayer. We are especially disturbed by what is going on in Syria and concerned over the exodus of Christians from the region. We have to try and find a way of solving this problem’.

Metropolitan Gennadios stressed the humanitarian aspect of the problem as it concerns refugees. ‘There are thousands and hundreds of thousands and may be even millions of them now. They are in Jordan, in Lebanon; some refugees have filtered into Turkey; there are a lot of people from Iraq, Syria… Especially hard is the situation of refugee camps in Jordan, Turkey on the border with Syria; there are thousands of displaced persons who are caught in inhuman conditions. Of course, humanitarian organizations try to help them as much as they can’, he said.

Having thanked Patriarch Kirill for the meeting, Metropolitan Gennadios said, ‘I believe it is very important now to think how the World Council of Churches and the Russian Orthodox Church could find a way to give these people at least some help and support and to promote dialogue for settling the conflicts you have mentioned’.

He also stressed the importance of the visit of a WCC delegation to Ukraine in March and thanked the WCC representation of the Moscow Patriarchate in Geneva for assistance in organizing the visit. The delegation met with representatives of the canonical Ukrainian Orthodox Church. ‘We had an opportunity to come to Kiev and members of our groups also saw what was going on on the ground’, the archpastor said. ‘And our next step is to follow up the efforts which have already been made’, he said.

Photos by the Patriarchal Press Service