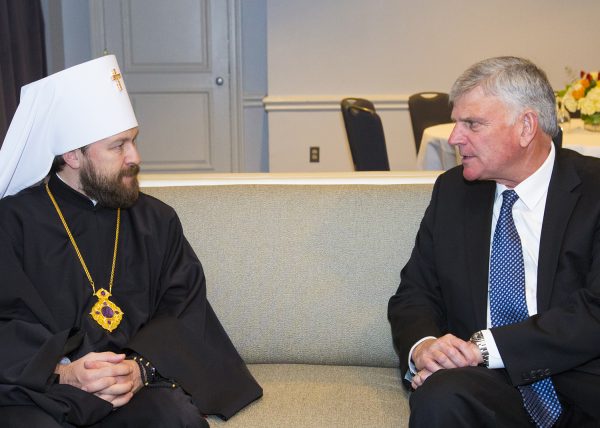 WASHINGTON, May 13, 2017—The Reverend Franklin Graham, President of the Billy Graham Evangelistic Association and Samaritan’s Purse, and His Eminence Metropolitan Hilarion of Volokolamsk, Head of the Department of External Church Relations of the Moscow Partriarchate, met together May 12, 2017, at the World Summit in Defense of Persecuted Christians in Washington, D.C. This historic conference brought together over 600 participants from 136 countries to call attention to the growing persecution of Christians around the world.

Metropolitan Hilarion and Reverend Graham stressed the importance of Russia and the United States setting aside their differences and working together to combat terrorism and protect Christians who are actively suffering persecution, especially in the Middle East and North and Central Africa. In anticipation of the expected meeting between President Donald J. Trump and President Vladimir Putin, the leaders of the two nations, Reverend Graham and Metropolitan Hilarion call upon Christians and churches worldwide to pray for this important meeting.

“The Bible commands us to pray for all those who are in authority. I ask Christians to pray that God will give President Trump and President Putin wisdom and a commitment to peace as they meet. With unprecedented numbers of Christians around the world facing torture, imprisonment, and death, if ever there was a time that we need to obey this command to pray, it is now.”

In his turn, Metropolitan Hilarion reiterated the words from the Joint Statement of Pope Francis of Rome and Patriarch Kirill of Moscow and All Russia: “the international community must undertake every possible effort to end terrorism through common, joint and coordinated action.” He expressed hope that the United States and Russia will unite their efforts in order to combat terrorism and protect Christians from persecution.