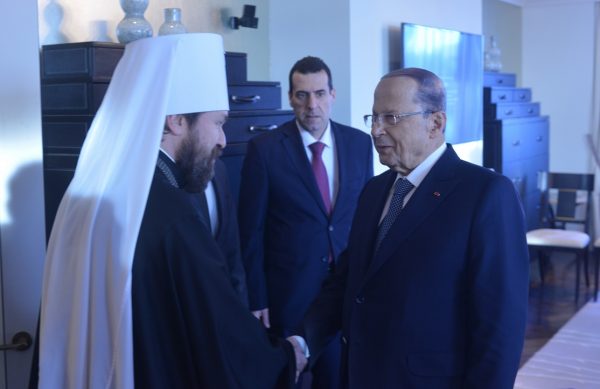 ‘It is a long-expected visit’, Metropolitan Hilarion said addressing the head of the Republic of Lebanon, who has come to Russia for an official visit. The metropolitan stated that Mr. Aoun is the only president in the Middle East and through the Arab world, who confesses Christianity. His Eminence noted that he had a joyful occasion to meet with the president of Lebanon repeatedly during his visits to that country.

Metropolitan Hilarion greeted Michelle Aoun on behalf of the Primate of the Russian Orthodox Church, noting that ‘His Holiness Patriarch Kirill of Moscow and All Russia was unable to meet with you personally but asked me to convey to you his best regards and wishes’.

The sides discussed the situation of Christians in the Middle East. Metropolitan Hilarion spoke in detail about the efforts of the Russian Church to defend Christians in the Middle East, also using international platforms. These problems are discussed at meetings of the Supreme Church Authority with state leaders, high representatives of international organizations and religious leaders.

Pointing out that the Republic of Lebanon is the only country in the Middle East to fix the rights of Christians in its Constitution, the DECR chairman expressed hope that joint peacemaking efforts of the Russian Orthodox Church and Christians in Lebanon will help preserve and strengthen Christian presence throughout the Middle East.