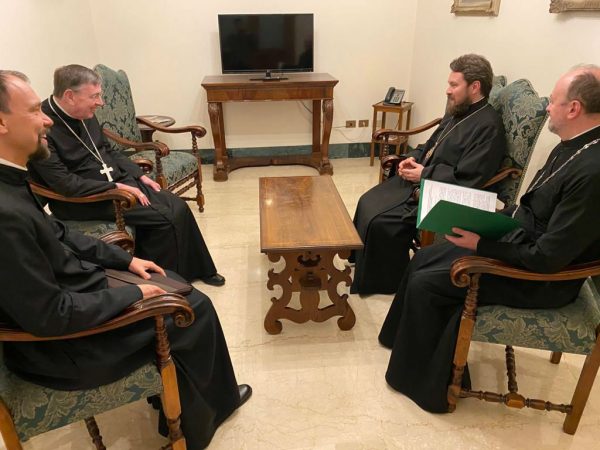 On 11 February 2020, Metropolitan Hilarion of Volokolamsk, chairman of the Moscow Patriarchate’s Department for External Church Relations (DECR), arrived in Rome with the blessing of His Holiness Patriarch Kirill of Moscow and All Russia to take part in the events commemorating the 4th anniversary of the historical meeting of Pope Francis with Patriarch Kirill in Havana.

Metropolitan Hilarion was met at Leonardo da Vinci airport by H.E. Aleksandr Avdeyev, Ambassador Extraordinary and Plenipotentiary of the Russian Federation to the Holy See; Hieromonk Amvrosy (Matsegora), executive secretary of the Administration of the Moscow Patriarchate parishes in Italy; and Rev. Jaromir Zadrapa, a staff member of the PCPCU.

In the evening Metropolitan Hilarion met with Cardinal Kurt Koch, President of the Pontifical Council for Promoting Christian Unity, at Domus Sanctae Marthae hotel in Vatican. They discussed the current status of relations between the Moscow Patriarchate and the Roman Catholic Church and paid special attention to fostering the Orthodox-Catholic dialogue being held by the Joint International Commission for Theological Dialogue between the Roman Catholic Church and the Russian Orthodox Church.