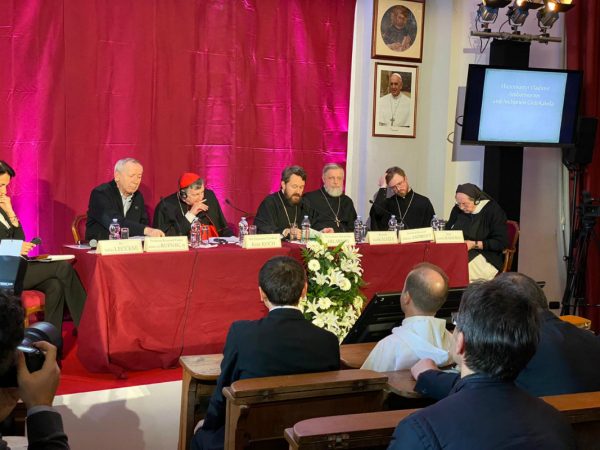 On 12 February 2020, a conference took place on “Saints – A Sign and Seed of Unity” at the Pontifical University of Saint Thomas Aquinas in Rome, devoted to the fourth anniversary of the meeting between Pope Francis of Rome and Patriarch Kirill of Moscow and All Russia.

The event was presided over by Cardinal Kurt Koch, president of the Pontifical Council for Promoting Christian Unity, and Metropolitan Hilarion of Volokolamsk, head of the Moscow Patriarchate department for external church relations (DECR).

Taking part in the conference was also a delegation of the Russian Orthodox Church, which came together with Metropolitan Hilarion, staff members of various dicasteries of the Roman Catholic Church, as well as professors and students of the St. Thomas Aquinas University and Italian public figures.

Cardinal Kurt Koch welcomed the gathering on behalf of Pope Francis, pointing to the relevance of conferences held annually at the anniversary of the Havana meeting to discuss subjects concerning the most important points of the Declaration signed by the Primates of the Roman Catholic Church and the Russian Orthodox Church. Thus in 2017, there was a discussion at the University of Fribourg in Switzerland on the general importance of the Havana meeting. In 2018, there was a discussion in Vienna on the situation of Christians in the Middle East, and in 2019 in Moscow on “Death and Dying in a Technological Society: Between Bio-medicine and Spirituality”. Cardinal Koch pointed to the relevance of the subject chosen for this year and stressed that the phenomenon of holiness and the example of saints is the foundation for building church unity

Then Metropolitan Hilarion greeted the participants and guests of the conference. In his address, he emphasized, “The first meeting of the Primates of the Roman Catholic Church and the Russian Orthodox Church to be held in history defined the prospect for developing bilateral relations for many years ahead. Due to the fundamental significance of the Havana meeting, it was agreed to mark this event annually by a joint conference on one of the pressing topics mentioned in the Joint Declaration which was signed to sum up the negotiations between the Pope and the Patriarch”.

His Eminence recalled the history of such conferences and said, “This year, our meeting is held in Rome, a city in which the relics of the holy first hierarchal apostles Peter and Paul and of many other apostles, martyrs and people of God rest, where great Christian shrines abide attracting thousands of pilgrims from all over the world. The place of the conference has defined its theme: “Saints – Sign and Seed of Unity”. The theme of holiness and saints occupies an important place in the Joint Declaration of Pope Francis and Patriarch Kirill”.

“Significant is also the reference made in the Joint Declaration to the rebirth of Christianity in Russia and other Eastern European countries”, His Eminence continued, “In the terrible years of theomachy, thousands of Orthodox people followed Christ’s path to the Cross, and in our days they are ranked among the saints as new martyrs and confessors of the Russian Church. At the same time, the faithful of other Churches also took the path of suffering, in particular those of the Roman Catholic Church”.

Metropolitan Hilarion reminded the conference that in May-July 2017, an unprecedented event happened in the life of the two Churches – the bringing in of a part of the relics of St. Nicholas the Wonderworker to Moscow and St. Petersburg from Bari. “The relics of the man of God brought from Myrra in Lycia to Bari in 1087 have never left the basilica, in which they rest, in the past 930 years. Thanks to the agreement reached between the Pope and the Patriarch, it became possible to bring a part of the relics of St. Nicholas to Russia”, he stressed.

Metropolitan Hilarion spoke next about the life and feats of St. Seraphim of Sarov and the charitable work carried out by Catholic Fyodor Petrovich Haass who was called “holy doctor”.

Among the speakers were also Rev. Alexiy Andreyev, lecturer at the St. Tikhon Orthodox University of the Humanities, whose theme was “The Understanding of Holiness in the Russian Orthodox Church” and Rev. Marco Pupnik, who spoke on “Holiness and Communion”.

After the conference, Metropolitan Hilarion’s film “St. Peter” was premiered with Italian translation at the university’s assembly hall.