Metropolitan Hilarion of Volokolamsk Meets with Primate of Malankara Church 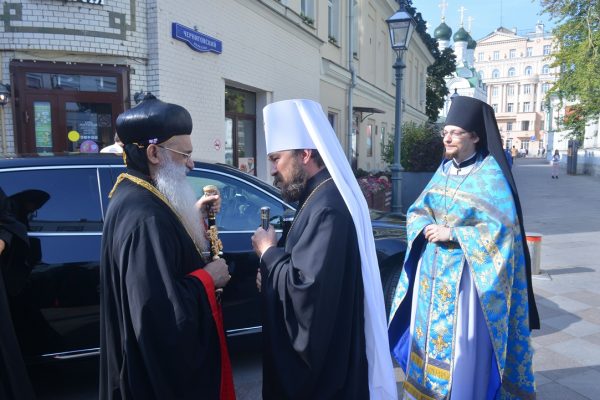 On September 1, the 11th Sunday after Pentecost, Metropolitan Hilarion of Volokolamsk, Head of the Moscow Patriarchate Department for External Church Relations (DECR) and Rector of the Ss Cyril and Methodius Institute of Post-Graduate Studies (CMI), celebrated the Divine Liturgy at the church of Ss Martyrs and Confessors Michael, Prince of Chernigov and His Boyar Theodore, the Wonderworkers in Moscow. The church is a part of the Patriarchal Chernigov Metochion, which houses the CMI.

Among the worshippers were CMI staff members, faculty and students.

After the liturgy, Metropolitan Hilarion greeted the Primate of the Malankara Church on behalf of His Holiness Patriarch Kirill of Moscow and All Russia and said in particular, ‘Your Holiness, you visited the Russian Orthodox Church in 1988 as a bishop of the Malankara Church who accompanied a delegation led by the Catholicos, and you had an opportunity to see the life of our Church at that time. Now you can see the life of the Russian Orthodox Church today. For the last 30 years, our Church has changed beyond recognition. While in the Soviet years we had a little more than 6000 parishes in the whole of the Russian Orthodox Church, today there are almost 40 thousand parishes. It means that during 30 years we opened one thousand churches a year. At that time, we had only 20 monasteries while today they are almost a thousand. And these monasteries are now filled with young monks and nuns. While in the Soviet time we had only three theological seminaries, today we have already opened over 50. At that time, it was impossible to imagine that theology would be taught in secular universities, while today it is taught and officially recognized by the state as an academic specialization. We have an opportunity for granting our graduates certificates that are recognized by the state. All this and many other things can be seen by you and your honourable delegation with their own eyes.

‘Today I welcome you to the Ss Cyril and Methodius Institute of Post-Graduate Studies, an educational institution that was established a little over ten years ago at an initiative and with a blessing of His Holiness Patriarch Kirill. His Holiness chairs our institute’s supervisory board. We educate post-graduates and seekers of doctor degree here and many of them then become clergymen, some become bishops while others take up secular jobs to bring the spirit of Christianity into the secular world, to those with whom they work. The task of our institute is to educate a new generation of clergy, church workers, church diplomats and workers in the field of ecclesial education’.

In conclusion of his welcome, Metropolitan Hilarion presented the Primate of the Malankara Church with an icon of the Saviour.

His Holiness Baselios Marthoma Paulose II, in his turn, thanked the DECR chairman and expressed hope for the successful development of relations between the two Churches. He said in particular, ‘The Malankara Orthodox Church had very deep and close relationships with the Russian Orthodox Church three decades ago’. He also mentioned the translation of Loving Kindness made by Dr Charian Eapen into the Malayalam language used in the Malankara Church. The book has been distributed gratis and has become popular not only among Christians but among Hinduists as well. Recalling his visit to Russia in 1988, when he was the youngest bishop in the Malankara Church and a member of the delegation to the Millennium of the Baptism of Rus’, the Catholicos confirmed, ‘At that time we could see how lively was the faith in Rus’ and how many faithful people there were here’

‘We are delighted and gratified to visit your theological school’, said Metropolitan Zachariah Mar Nikolovos addressing Metropolitan Hilarion. He thanked His Eminence for the hospitality and expressed hope for the development of cooperation between the two Churches.

Then the guests visited the CMI. In the rector’s study, Metropolitan Hilarion and Catholicos Baselios Marthoma Paulose II had a talk. Taking part in it were the Malankara Church delegation who accompanied His Holiness the Catholicos. The Russian Orthodox Church was represented by Hieromonk Stephen, Hieromonk Ioann and R. Akhmatkhanov.

Metropolitan Hilarion introduced them to the work of the Department for External Church Relation (DECR). Speaking about the relationships between the Moscow Patriarchate and the Malankara Church, His Eminence made a special mention of the importance of the efforts made for these relations by Metropolitan Nikodim (Rotov) of blessed memory and Patriarch Kirill when he was DECR chairman.

Speaking in response, the Primate of the Malankara Church thanked Metropolitan Hilarion for the warm welcome and expressed the wish to develop bilateral relations between the two Churches at a new stage.

Metropolitan Zachriah Mar Nikolovos noted that the tragedy of the Russian Orthodox Church in the 20th century and her revival is an example of how a Church can overcome hardships and become stronger.

The sides also considered possible ways of cooperation in the academic sphere. The CMI rector explained to the guests the specific features of the CMI and its international experience, in particular, in holding inter-Christian Summer Institutes.

The Malanraka side expressed gratitude for the enrolment of Deacon Anoupa Ragou to the precentors department of Moscow Theological Academy and interest in developing cooperation in the academic sphere. They thanked Metropolitan Hilarion for his book ‘The Sacrament of Faith’, the English version of which is used in India as an educational aid for students of the Malankara Church schools.

The sides also considered other possible areas in which the two Churches can cooperate. In conclusion, Metropolitan Hilarion stressed that already today there is every possibility for developing bilateral contacts and strengthening the relationships – the efforts which the DECR will promote in all possible ways.

After the meeting, the sides exchanged gifts.

The Malankara Church is part of the family of the Oriental Churches along with the Coptic, Ethiopian, Eritrean Churches and the Armenian Apostolic Church. According to tradition, it was founded by St. Thomas in the 1st century. Its center is located in the State of Kerala, India. It has dioceses and parishes in India, Malaysia, Singapore, Australia, Europe and North America. The latest visit of its Primate to Russia took place in 1976.