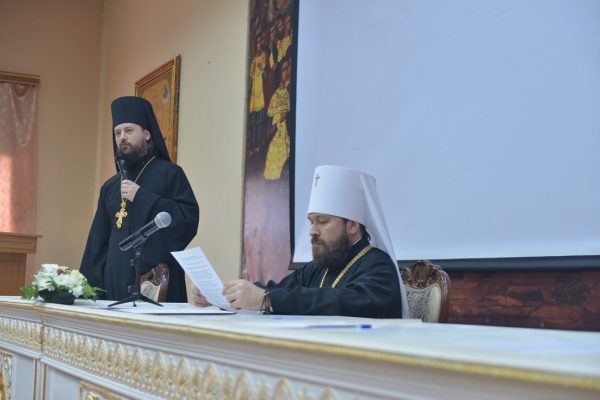 On 16th February 2020, St. Nicholas Theological Seminary in Ugresha, Moscow Region, held a grand meeting on the occasion of the commemoration day of St. Nicholas the Enlightener of Japan, Equal-to-the-Apostles. Timed to the feast day was also an International Church and Historical Conference on Spiritual Heritage of St. Nicholas of Japan.

The rector of the seminary, Hegumen Ioann (Rubin), addressed the participants in the grand meeting and the conference with an opening speech.

It was followed by a presentation of Metropolitan Hilarion of Volokolamsk, chairman of the Moscow Patriarchate’s Department for External Church Relations, rector of the Ss. Cyril and Methodius Theological Institute of Postgraduate Studies.

Having noted that the conferences dedicated to St. Nicholas of Japan were annually held at St. Nicholas Seminary for several years, Metropolitan Hilarion said: “Today’s conference is of special importance, as it marks the memorable dates celebrated in 2020: the 150th anniversary of the Russian Ecclesiastical Mission in Japan, the 50th anniversary of glorification of Archbishop Nicholas (Kasatkin) of Japan, and the 50th anniversary of autonomy of the Japanese Orthodox Church within the Moscow Patriarchate.” As Metropolitan Hilarion reminded all those present, the grand meeting opens a series of events marking this year’s jubilees. Their culmination will be a visit of His Holiness Patriarch Kirill of Moscow and All Russia to Japan at the invitation of Metropolitan Daniel of Tokyo and All Japan. In September 2020 the Primate of the Russian Church will visit Tokyo and Nagasaki to lead the jubilee celebrations.

“St. Nicholas Seminary in Ugresha has a wonderful heavenly patron – St. Nicholas of Japan, who is held dear by the people of both Russia and Japan, and who brought Orthodoxy to the Land of the Rising Sun,” the DECR chairman added, “St. Nicholas, Equal-to-the-Apostles, in his life showed an example of cordial love for God and for his neighbours, as well as strength in enduring ordeals, rare diligence in science, remarkable patience, despite all his natural vehemence, and many more things which St. Paul, Leader of the Apostles, described in one phrase, ‘I am made all things to all men, that I might by all means save some’ (1 Cor 9:22). St. Nicholas of blessed memory fulfilled this apostolic rule completely, having become the enlightener, equal-to-the-apostles, of the people, who differ from us in many things, and whom the saint loved wholeheartedly and devoted all his life to.”

Among the speakers at the conference was also H.E. Toyohisa Kozuki, Ambassador Extraordinary and Plenipotentiary of Japan to the Russian Federation, who emphasized that St. Nicholas became a bridge connecting Russia and Japan.

During the meeting Metropolitan Hilarion presented church awards to the faculty, benefactors and students of the seminary.