Saint Nicholas of Japan was a unique and notable example to all Orthodox Christian missionaries. First, he threw himself wholeheartedly into understanding the language and culture. When he was found reading non-Japanese books, his Archbishop rebuked him, and he resolved to only read Japanese literature. He got out into the community and listened to Buddhist and Shinto storytellers and preachers. He researched the history of Japan. He knew it better than most Japanese.
Archpriest Geoffrey Korz | 13 November 2008 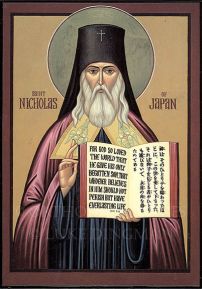 Saint Nicholas of Japan was a unique and notable example to all Orthodox Christian missionaries. First, he threw himself wholeheartedly into understanding the language and culture. When he was found reading non-Japanese books, his Archbishop rebuked him, and he resolved to only read Japanese literature. He got out into the community and listened to Buddhist and Shinto storytellers and preachers. He researched the history of Japan. He knew it better than most Japanese.

Second, he took the long view. He spent eight years researching the Japanese language and culture. His first convert came after four years of study. Taking the long view also means delegation. In 1869 – five years after the first convert! – he handed over his congregation to another missioner. Having established one congregation, he moved to Tokyo to set up another. This pattern of establishing, delegating and moving on marked his ministry.

Third, he understood the people. His first convert was a samurai called Sawabe. Takuma Sawabe was an ultra-nationalist – one of the kinds of people in the black minivans that we would shy away from these days – who regarded the Russian Consulate as symbolic of all of the problems of opening up the country to foreigners. When Sawabe came to the Consulate, sword drawn, ready to kill Nikolai, Nikolai knew to appeal to his samurai nature:

“Why are you angry at me?” Fr. Nicholas asked Sawabe.

“All you foreigners must die. You have come here to spy on our country and even worse, you are harming Japan with your preaching,” answered Sawabe. “But do you know what I preach?” Nicholas replied.

“Then how can you judge, much less condemn something you know nothing about? Is it just to defame something you do not know? First listen to me, and then judge. If what you hear is bad, then throw us out.”

Sawabe did listen to him, and was persuaded through his words and through the Holy Spirit working in him. Nikolai knew how to make Sawabe listen. How many of us today can honestly say that we know how to make Japanese people listen to us and our message?

Fourth, he was committed to his people. This is a matter of integrity. He needed the Japanese people to know that he was on their side. Many missionaries take the option of relying on their home countries when things get tough, but Nikolai was absolutely sold out for Japan, and his congregation knew his love through his dedication to them. When Japan and Russia went to war, many of his own congregation urged him to go back home. (Remember that he came to Japan under the auspices of the Russian Consulate in Japan.) But he refused; he needed to serve and be with his people. At the same time, he found ways to minister to Russian prisoners of war in Japan.

Finally, he was quick to delegate, as we have already alluded to. When Paul Sawabe begun to believe, he brought three friends along to hear Nikolai’s preaching. Nikolai left the four original believers to go and do their own discipleship, and one year later there were 12 baptised, and 25 of what we would now call “seekers”. Fifteen years after this, the church was four thousand strong. To make this work would require yet further delegation, and so he began the process of ordaining Japanese clergy. By the time he came to celebrate fifty years of his mission, there were 43 clergy ordained and 121 lay preachers. And let’s remember that five years after having a church of one, he passed it on and moved on to Tokyo. He knew that if he was going to reach the whole of Japan, he could not confine himself to one area for the whole of his missionary life.