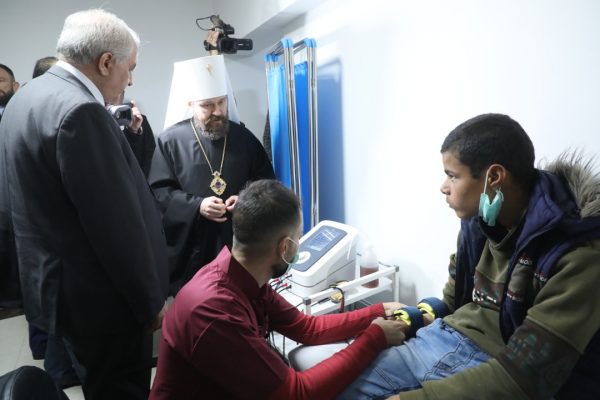 On March 24, the Holy Synod of the Russian Orthodox Church heard a report of the chairman of the Department for External Church Relations of the Moscow Patriarchate, Metropolitan Hilarion of Volokolamsk, on his visits to Israel, Palestine and Syria made with the blessing of His Holiness Patriarch Kirill of Moscow and All Russia. In particular, in Damascus, Metropolitan Hilarion took part in the opening of the Paediatric Rehabilitation and Prosthesis Center at the Russian Metochion.

From February 19 to 21, 2022, the metropolitan visited Israel and Palestinian Autonomy. During this trip he met with His Beatitude Theophilos III, Patriarch of the Holy City of Jerusalem and All Palestine, at the Patriarchate of Jerusalem. During the meeting, they discussed joint humanitarian projects. With the blessing of His Beatitude, Metropolitan Hilarion also celebrated, together with Metropolitan Hysihios of Capitolias, the Divine Liturgy at the Church of the Holy Sepulchre.

Metropolitan Hilarion visited the Russian Ecclesiastical Mission’s Hebron Metochion of Holy Fathers and the Basilica of the Nativity of Christ in Bethlehem. He also had a working meeting with the Extraordinary and Plenipotentiary Ambassador of the Russian Federation to Israel, A. D. Viktorov.

From March 4 to 6, His Eminence went to Syria, during which he met with His Beatitude John X, Patriarch of Great Antioch and All the East.

He also took part in the solemn opening of the Paediatric Rehabilitation and Prosthesis Center established at the Damascus Representation of the Russian Orthodox Church with the participation of the Foundation for Support of Christian Culture and Heritage. The patients of this Center are children who lost limbs or sight as a result of the hostilities in the territory of Syria. Working with these children are prosthetists, rehabilitologists, psychologists, ophthalmologists and other specialists who give them complex rehabilitation assistance.

During his trip, Metropolitan Hilarion celebrated together with Bishop Moses of Darayya the Divine Liturgy at the Chapel of Holy Martyr Ignatius the God-Bearer at the Damascus Methochion of the Russian Orthodox Church.

Metropolitan Hilarion also visited churches of the Church of Antioch, which were damaged during hostilities in Syria and now are being restored with the participation of the Russian Orthodox Church, namely the Church of St George the Conqueror with a parish school in Arbin and the Church of the Dormition of the Most Holy Theotokos in Al-Zabadani.

The Synod took the report into consideration and expressed satisfaction with the development of the Russian Orthodox Church’s relations with the Orthodox Churches of Antioch and Jerusalem in the humanitarian sphere.

The Holy Synod ascertained the importance of the work carried out with the participation of the Russian Orthodox Church to help children affected by the armed conflict in Syria and to restore ruined churches.