Metropolitan Hilarion Tells about His Meeting with Phanar Hierarch

Source: Union of Orthodox Journalists
For the first time since Phanar’s decision to “grant autocephaly to Ukraine”, we had the opportunity to exchange views on what'd happened, His Eminence noted.
Pravmir.com team | 26 October 2019 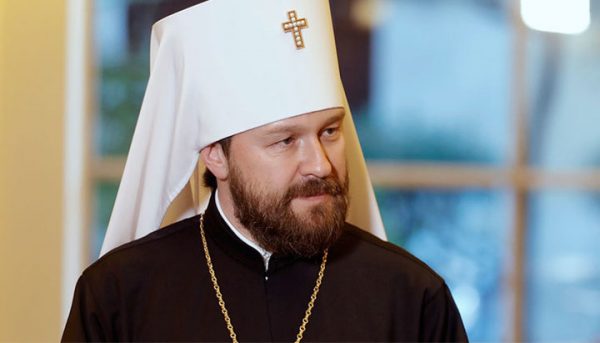 The Chairman of the Department for External Church Relations of the Russian Orthodox Church, Metropolitan Hilarion (Alfeyev) of Volokolamsk, spoke about the details of the meeting with the Head of the Greek Orthodox Archdiocese in America, Archbishop Elpidophoros (Lambriniadis) of America.

“I was not an initiator of this meeting. It was held at the residence of the Antiochian Archbishop of America Joseph, who had kindly invited us both to dinner,” explained Bishop Hilarion in an interview with RIA Novosti. “This was preceded by a mediation initiative of one good Orthodox Christian, formerly Chancellor of the Antiochian Archdiocese Charles Ajalat, who organized my current visit to the United States.”

The hierarch of the Russian Orthodox Church noted he had met Metropolitan Elpidophoros in Finland and they’d known each other for 25 years. At the time of their first meeting, Bishop Hilarion was a hieromonk, while Phanar’s Bishop was a deacon.

“Talking at the residence of the Archbishop of Antioch, in the presence of the latter, we had the opportunity, for the first time after the decision of the Synod of Constantinople ‘to grant autocephaly to Ukraine’ and the subsequent decision of our Synod to cease communion with Constantinople, to exchange views on what had happened and what could have been done in that situation,” the Chairman of the DECR of the Russian Orthodox Church continued.

He shared with RIA Novosti journalist his confidence that the Holy Spirit can guide ministers to the right decisions, as has already been many times in the history of the Church.

“We pray for the preservation of the unity of the Orthodox Church. And we hope that the current division will be eliminated. <…> The Holy Spirit in the history of the Church has repeatedly guided its ministers to adopt the right decisions. I believe that in our time it is also possible,” said Metropolitan Hilarion.

The hierarch of the Russian Orthodox Church suggested that his meeting with the representative of the Patriarchate of Constantinople did not happen by chance the day after Patriarch Bartholomew had announced the canonization of Archimandrite Sophrony (Sakharov – Ed.).

“I believe that Father Sophrony prays for the Russian Church which was dear to him, which raised him and nurtured him, and for the Church of Constantinople, which would twice receive him into its bosom: first – when he came to Mount Athos and then – when while in England, he found himself in difficult circumstances,” said the Chairman of the DECR of the Russian Orthodox Church. “May the prayer of this saint of God help us to maintain the unity of the Holy Churches of God which we pray for at every liturgy.”

Recall that on October 23, 2019, Metropolitan Hilarion met with the heads of the Greek and Antiochian Archdioceses.