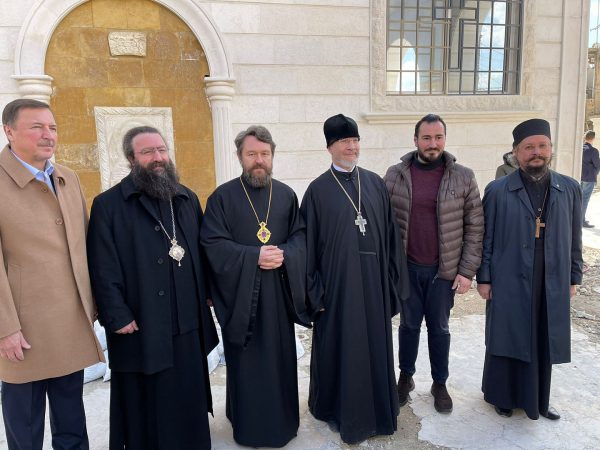 On March 5, 2022, Metropolitan Hilarion of Volokolamsk, Chairman of the Department for External Church Relations of the Moscow Patriarchate, with a blessing of His Beatitude Patriarch John X of Great Antioch and All the East, visited the Orthodox Church of Antioch’s churches, which were damaged and partly destroyed during hostilities in Syria and now are being restored with the Russian participation. The DECR chairman was accompanied by Extraordinary and Plenipotentiary Ambassador of the Russian Federation to Syria A. V. Yefimov and the Russian embassy diplomats, Metropolitan Ephraim of Aleppo and Alexandrette, DECR vice-chairman Archpriest Nikolay Balashov, Hegumen Arseniy (Sokolov), representative of the Patriarch of Moscow and All Russian to the Patriarchal See of Antioch, and Archdeacon Hilarion Beshara.

The restoration of the church of Great Martyr George the Victorious and the parish school at Arbin, a suburb in eastern Damascus, is nearing completion. The church compound, just as the houses around it in Arbin, were heavily damaged during active military clashes with militants who sought to take hold of the capital city.

Addressing Metropolitan Ephraim, His Eminence Hilarion said, ‘Your Eminence, I am glad for the opportunity to visit this holy place. When we presently drove through the district destroyed by bombing and saw terrible skeletons of houses all around, we were reminded once again of the horrors that Syria went through, that Damascus went through. I am very glad that, thanks to the Russian Army, it became possible to stop the ravaging of terrorism that threatened to wipe out Syria as a state and Syrian Christians who have lived here for two thousand years’.

The DECR chairman also shared a hope that the restoration of this church carried out with the Russian participation would become an impetus for restoring the houses around and that parishioners who had to leave the country would return home.

In his response, Metropolitan Ephraim conveyed the words of greeting from His Beatitude Patriarch John X. ‘It is a fact of common knowledge that our peoples are tied with strong relations of friendship, just as strong relations tie our Churches’, he stressed, ‘However little I can add to your remarkable words, I would like to confirm that people do really await the moment when they will be able to return to their homes, to their churches’.

His Eminence Hilarion gifted the parish at Arbin an icon of Great Martyr George the Victorious to whom the church is dedicated.

In the church of the Dormition under restoration in the city of Al Zabadani to the west of Damascus, surrounded by ruined houses destroyed by rocket and mortar shelling, Metropolitan Hilarion was met by the singing of local Orthodox youth.

As Metropolitan Ephraim noted, young people continue coming to the church and remain faithful to the Church and help her, ‘They help in the work that continues here and are part of it. Despite all the difficulties, despite their business, including their studies, they continue coming here and helping’.

‘Our Patriarch says that the strength of the Church of Antioch lies in her young people’, His Eminence Ephraim summarized.

Addressing the young parishioners, Metropolitan Hilarion said, ‘I am very glad that we have an opportunity to help you restore this church. I am very glad to see how you work in it and sing. I would like to ask you not to leave Syria – it is your country, you are masters here and its future depends on you. And we will help you restore the church. I wish that this old beautiful country, in which Christianity has existed for already two thousand years, may revive and that you all may live happily here. And we will help you as much as we can’.

The DECR chairman presented the church of the Dormition in Zabadani an icon of St. Sergius of Radonezh.

On the same day, Metropolitan Hilarion visited the places associated with the life of St. Paul; in particular, the House of Ananias in Straight Street in Damascus and the Patriarchal Monastery of St. Paul at Kaukab built on the site of the vision of Resurrected Christ to Saul. The Monastery’s church was built in 1965 with the funds donated by His Holiness Patriarch Alexis I of Moscow and All Russia. Later, in 2005, a monument to St. Paul executed by Russian sculptor A. I. Rukavishnikov was unveiled there. During his visit to the monastery, Metropolitan Hilarion was accompanied by Ambassador A. V. Yefimov.