Source: DECR
Metropolitan Hilarion’s Interview to Vatican Radio
Metropolitan Hilarion (Alfeyev) | 18 October 2014
Answering questions from the interviewer, Metropolitan Hilarion of Volokolamsk, head of the Moscow Patriarchate’s department for external church relations, attending the plenary session of the Third Extraordinary General Assembly of the Synod of Catholic Bishops as representative of the Russian Orthodox Church, spoke on the Christian understanding of the institution of the family and the stand taken by the Russian Orthodox Church with regard to the civic conflict in Ukraine. 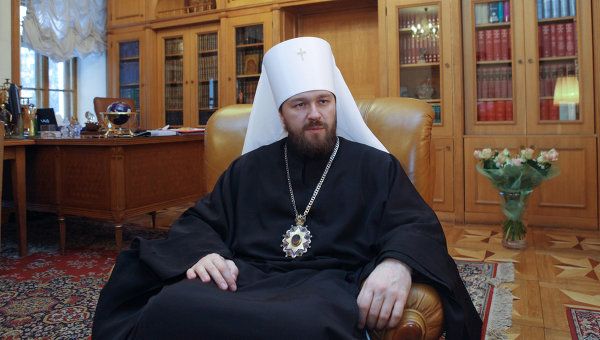 – Your Eminence, please tell us which practices of the Orthodox Church with regard to the family and marriage can be adopted by the Catholic Church?

– I think, in the first place, it is necessary to renounce the rigorist approach. We have common church rules and a common understanding of marriage: marriage is the union of man and women, and it should be one and the only. At the same time however, in practice there is a great deal of situations where this doctrine is not observed for various reasons. Then the problem moves from doctrinal to pastoral plane, in which the Orthodox Church has accumulated a certain experience, first of all, sometimes using the principle of akriveia – the strict adherence to the rules and sometimes the principle of oikonomia – condescension for human weakness.

In the discussions I have heard here today, the question was raised whether divorced spouses may be allowed to take Holy Communion and to make Confession. It seems to me that this question should be subjected to a thorough study, and we are ready to present our pastoral experience to our Catholic brothers.

I think, it is absolutely inadmissible to replace the Sacrament of Holy Communion with what some speakers have called “spiritual communion”, for it cannot be a substitute at all. And here we have a great space for cooperation and exchange of opinions.

– After the week of the Synod’s meetings a so-called “post-debate report” has come out to provoke mixed reactions here. Is there anything confusing for you personally in it?

– Honestly speaking, I have had no time to read this report, but I have heard today numerous reactions to it, which will be published as well. From this reaction I have gathered that there is a considerable divergence of opinion among Catholic hierarchs, which is to be taken into account in drafting the final document. I have a feeling that the opinions expressed in that document were not final and some of the attitudes expressed may be incorrectly interpreted in it.

– Catholic communities in many European countries give their churches to Orthodox believers to use, including the faithful of the Russian Orthodox Church. In Russia, Ukraine and Byelorussia are there Catholic communities which have no churches of their own while at a given settlement there is an Orthodox church. Do you think such practice is possible there, but the other way round?

– In each particular place, the problem should be resolved on the basis of pastoral wisdom and the mood of the faithful, and we should be sure that the implantation of a community into the soil of the other will not harm them both and will not become a cause for conflicts and misunderstandings between different communities.

– Your Eminence, what role can the Church or Churches play in settling the conflict in Ukraine?

– First of all, Churches should not interfere in a political confrontation. I have spoken about it openly today, referring to the Ukrainian Greek Catholic Church.

I believe our mission and our mandate, which we have received from the Lord Himself, is to unite people, to reconcile them. We should not go into details of the political process nor associate ourselves with a particular side of a conflict – let politicians and journalists do it. We should be open to people of any political orientation except for anti-human or chauvinistic one and support those who stand on the opposite sides of a barricade.

Such was and is the stand of the Ukrainian Orthodox Church of the Moscow Patriarchate, which does not wish to identify with a particular segment of the political spectrum but supports all people. It should be mentioned that the faithful of our Church (I say “our” because the Ukrainian Orthodox Church of the Moscow Patriarchate is part of the one multinational Russian Orthodox Church), unfortunately, have found themselves on the different sides of the barricades. We should be fully aware of this and do everything to prevent the civic conflict from turning into an armed confrontation, to resolve all the controversies through negotiations so that people will not have to pay such a high price for their convictions.

– Your Eminence, do not think my question provocative since it is voiced absolutely openly. May be, this question has become especially relevant in the context of the Ukrainian conflict. Tell me, please, is it possible to establish in Ukraine a single autocephalous Orthodox Church?

– There is no need to establish an autocephalous Church as the one Local Church already exists there. It is the Ukrainian Orthodox Church of the Moscow Patriarchate.

Calls to establish an autocephalous Church are actually calls to tear away the Ukrainian Orthodox faithful from the united Russian Orthodox Church. We cannot support them because such calls are not based on our self-understanding and church canons. Our faithful do not support them. Such calls are based solely on political expediency considerations: some politicians felt like declaring the principle “an independent Church in an independent state”, and the idea was taken up by the schismatics because the ideology of schism is based on this principle alone.

There is no other reason for the existence of a schism then to state that an independent state should have an independent Church. Then why not demand that the same Ukrainian Greek Catholic Church break away from the Pope, who is not just a certain symbolic head of that Church but really governs it through the supreme archbishop, approving decisions about the establishment of dioceses and episcopal ordinations?

There is no such relationship between the Ukrainian Orthodox Church and the Moscow Patriarchate because the Moscow Patriarchate does not have to approve decisions about the election of bishops or establishment of new dioceses. The Patriarch only approves the decision on the election of the Primate while the name of the Patriarch is mentioned during the liturgy. That is to say, it is not administrative or financial dependence. It is a spiritual relationship which has existed for many centuries going back to our common Dniester baptismal font of Prince Vladimir.

We are utterly opposed to breaking up relations under the influence of political expediency – the relations which have shaped for centuries to serve today as a powerful uniting force. While politicians and schismatics divide people, the Church unites them.

– Perhaps in Byelorussia the cooperation between the Catholic Church and the Orthodox Church is a good model for co-existence?

– I think Byelorussia is a good model for co-existence between the Orthodox and the Catholics just as Russia is, in which there are no conflicts between us. We live in peace and harmony. I believe we can share this experience with our brothers in some other countries as well, in which such harmony and cooperation have not been reached as yet.