Source: DECR
Natalya Mihailova | 05 September 2017
On 4 September 2017, with the blessing of His Holiness Patriarch Kirill of Moscow and All Russia, the chairman of the Moscow Patriarchate’s Department for External Church Relations began his visit to Greece. 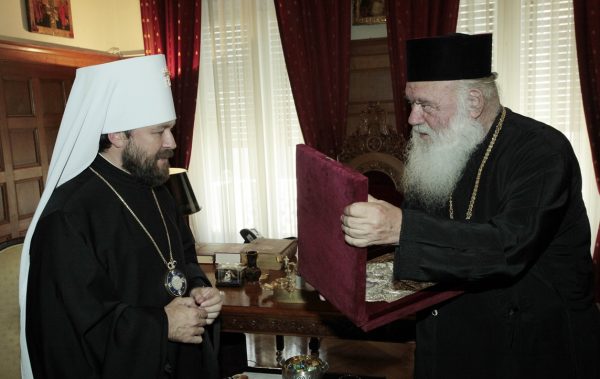 In Athens, at the residence of the Primate of the Orthodox Church of Greece, Metropolitan Hilarion had a meeting with His Beatitude Archbishop Ieronymos of Athens and All Greece.

His Eminence conveyed to the Primate of the Church of Greece brotherly greetings from His Holiness Patriarch Kirill and his invitation to visit Moscow to take part in the celebrations marking the centenary of the restoration of the Patriarchate in the Russian Orthodox Church.

The participants in the meeting discussed prospects of cooperation between the two brotherly Churches in education, culture and other spheres. They also exchanged opinions on the situation of Christians in the Middle East and other regions. Archbishop Ieronymos told the DECR chairman about the efforts of the Orthodox Church of Greece, aimed at upholding the traditional Christian values in the Greek society.

His Beatitude noted that he cherished warm recollections of his official visit to the Russian Orthodox Church in May 2012, and of his meetings with His Holiness Patriarch Kirill, the clergy and laypeople of the Moscow Patriarchate.

Taking part in the meeting were Archmandrite Simeon (Voliotis), Protosyngel of the Archdiocese of Athens; Archimandrite Ignatios (Sotiriadis), secretary of the Synodical Committee of the Orthodox Church of Greece for Inter-Orthodox and Inter-Christian Relations; as well as Hierodeacon Grigory (Sokolov), a staff member of the DECR who accompanies Metropolitan Hilarion on his visit.