Source: DECR
Natalya Mihailova | 12 April 2014
On 10 April 2014, Metropolitan Hilarion of Volokolamsk, chairman of the Moscow Patriarchate’s Department for External Church Relations, met with H.E. Primož Šeligo, Ambassador Extraordinary and Plenipotentiary of the Republic of Slovenia to the Russian Federation. 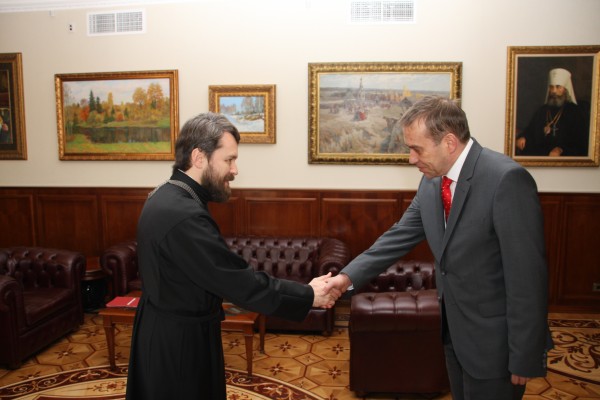 Representing the Department for External Church Relations at the meeting were archpriest Sergiy Zvonarev, secretary for far abroad countries, and hierodeacon Roman (Kiselev), a staff member of the Secretariat for Far Abroad Countries. Taking part in the meeting were also Mr. Saša Geržina, president of the Slovenia-Russia Friendship Association and the first Slovenia’s ambassador to Russia, and Ms. Andreja Kuzman, 3rd secretary of the Embassy of the Republic of Slovenia in Russia.

Metropolitan Hilarion and Mr. Primož Šeligo discussed the cooperation between the Moscow Patriarchate and Slovenia in spiritual and cultural spheres and paid particular attention to the preparation for the annual memorial ceremony on Vršič pass, which will take place in the end of July and be timed to the 98th anniversary of the foundation of the Russian Chapel of the Holy Prince Vladimir, Equal-to-the-Apostles. The chapel was built to commemorate Russian soldiers who had died there during World War I.

Mr. Šeligo presented the representatives of the Russian Church with official invitations to the memorial celebrations.