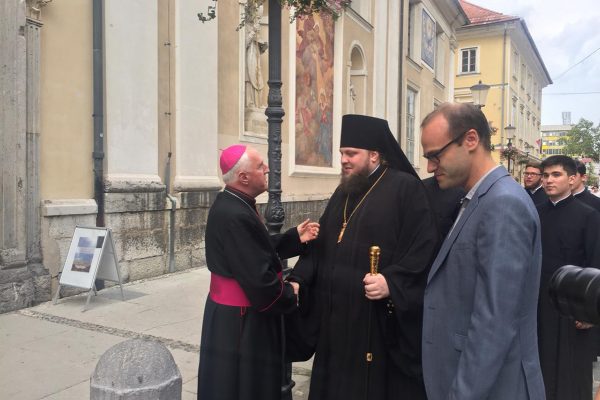 From July 25 to 29, 2019, with a blessing of His Holiness Kirill, Patriarch of Moscow and All Russia, representatives of the Russian Orthodox Church visited Slovenia for events held to mark the 103th anniversary of the foundation of the Chapel of the Most Holy Prince Vladimir Equal-to-the-Apostles on the Vrsic Pass. The chapel was built there in memory of Russian war prisoners who died during World War I.

The delegation was led by Bishop Siluan of Petergof, rector of St. Petersburg Theological Academy. Participating in the commemorative events was also the Academy’s mixed choir conducted by Sister Xenia (Kanshina).

On July 25, the delegation arrived in Ljubljana. On that day, Bishop Siluan visited the Ss Cyril and Methodius Cathedral of the Metropolis of Zagreb-Ljubljana of the Serbian Orthodox Church. He was welcomed by Bishop Porfirije of Zagreb and Ljubljana and the clergy. In the church, they exchanged greetings and gifts and then at the adjoining administrative center the two hierarchs and delegations had a fraternal talk.

Then the guests came to the palace of Ljubljana Catholic Archbishops for a talk with the president of the Bishops’ Conference in Slovenia, Archbishop Stanislav Zore of Ljubljana. The archbishop warmly welcomed His Grace Siluan and took them on a brief tour of the Catholic cathedral St. Nicholas the Wonder-workers.

On July 26, the Russian Orthodox delegation visited the Cistercian monastery in Sticna near Ljubljana. It is the oldest Cistercian monastery in Slovenia, which was first mentioned in chronicles in 1132. In the monastery, there was an inter-Christian meeting on the peace-making role of Christian Churches and prospects for academic contacts. Participating in it were Metropolitan Porfirije, Serbian Orthodox Church; Bishop Stanislaw Lipovsek of Celje, Roman Catholic Church in Slovenia; Father Nicholas Aracki, prior of the Cistercian Order’s abbey; Bishop Geza Filo, Evangelical Church of Slovenia; Rev. Matheus Mehle, director of the Catholic Institute of Youth; a delegation of the University of Ljubljana Faculty of Theology led by Prof. Robert Petkovsek; representatives of the Slovenia-Russia Society, and others.

In the evening, the delegation went to the city of Kranska Gora for a concert of the St. Petersburg Theological Academy’s mixed choir and the local choir of the city cultural society ‘Echo’. After the concert, the delegation were present at the memorial mass at the Church of the Assumption.

On July 27, the solemn memorial ceremony took place at the Russian Chapel of the Holy Prince Vladimir at Vrsic Pass. The event was attended by President of Slovenia Borut Pahor, Slovenian Prime Minister Marjan Sarec, Speaker of the National Assembly of Slovenia Dejan Zidan, Ljubljana Mayor Jani Hrovat and other officials. The delegation of the Russian Federation was led by K. Yu. Noskov, chairman of the Russian part of the Inter-governmental Commission for Cooperation in Trade, Science and Technology and the Russian Federation minister of digital development and mass communication. Present at the event were also Russian Ambassador to Slovenia D. Zavgaev, Apostolic Nuncio to Slovenia Archbishop Jean-Marie Spiech, Bishop Stanislav Lipivsej; Ms. Sasa Gerzina, chair of the Slovenia-Russia Society; Mr. V. Kochin, director of the Russian World foundation; Mr. S.Cheremin, head of the Moscow city department for external economic and international relations, and other prominent guests.

After the ceremony of laying wreaths at the common grave, Bishop Siluan of Petergof said a lity for the rest of the souls of the Russian war prisoners and after the prayer addressed the gathering, saying in particular, “The principal adornment of a country is its people, and the principle adornment of a church are its parishioners, and the principal adornment of an individual are his or her virtues. In our eyes you are the greatest gem of Slovenia. The perpetuation of the memory of soldiers who sacrificed their lives for others is a sacred duty pleasing to God. Praying for the blissful rest of our compatriots today, we trust that their memory will live from family to family”.

On the same day, there was a reception for honorary guests after which a friendly meeting took place between members of the Slovenia-Russia Society and guests from Russia and Slovenia.

On Sunday, July 28, the commemoration day of St. Vladimir Equal-to-the-Apostles, the rector of St. Petersburg Theological Academy celebrated the Divine Liturgy at the Russian Chapel of St. Vladimir Equal-to-the-Apostles. Bishop Siluan was assisted by Hieromonk Kirill (Peregudin), DECR secretariat for the far abroad, and several graduates of the academy in holy orders.

In the afternoon, the guests were taken to Lake Bled for a boat cruise. In the evening, the St. Petersburg Academy mixed choir gave a recital at the Franciscan Church of the Annunciation in Ljubljana.

On July 29, the delegation of the Russian Orthodox Church left for Moscow. At the airport they were seen off by Bishop Siluan and Ambassador D. Zavgaev.