Metropolitan Hilarion: we should zealously pray for an end of fratricidal battle in Ukraine

Source: DECR
Metropolitan Hilarion (Alfeyev) | 22 July 2014
With a blessing of His Holiness Patriarch Kirill of Moscow and All Russia, a fervent prayer for peace in Ukraine is tirelessly lifted up in all the churches and monasteries of the Russian Orthodox Church. 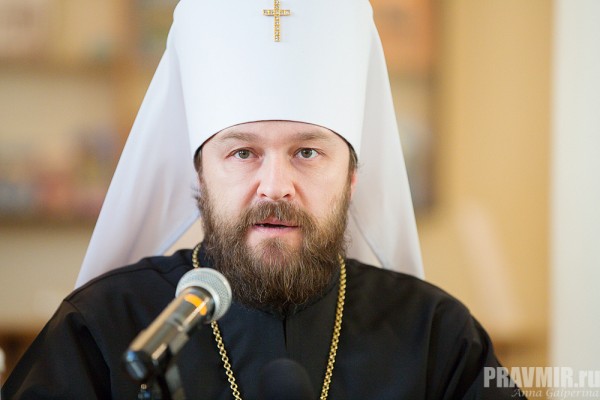 “We should zealously pray that the fratricidal battle be stopped because blood is shed and people die every day in the Ukrainian land”, Metropolitan Hilarion of Volokolamsk, head of the Moscow Patriarchate’s department for external church relations, said in his archpastoral homily on July 20. Addressing the congregation in the church of Our Lady the Joy to All the Afflicted in Moscow, the metropolitan said:

“This week we all have heard a horrible news about the crash of a plane with almost three hundred passengers and a crew. The remains of the plane are now in the territory not controlled by the Kiev authorities. Various forces are disputing over who should carry out the investigation, who should take away the bodies. The OSCE says that they are not let in there while the authorities of the Donetsk People’s Republic maintain the opposite, saying that they let in all but specialists are not coming over there. The Western powers state that it is the Kiev authorities that should carry out the investigation and take away the bodies from the place of the tragedy, while the Kiev authorities have no access to it.

“As a result, the human remains and aircraft debris are lying under the scorching sun, and as the warring parties argue, relatives of the dead in various countries, shocked and terrified, continue waiting for the bodies of their dead loved ones to be brought home and buried.

“There are very many such complicated situations now as the civil war continues, to say nothing of the fact that each party uses them to accuse the other one. And it is only Divine grace that can put political leaders on the path of reconciliation.

“It is for this reason that the Church should so zealously pray today for Ukraine, for all people living there, so that the Lord Himself may interfere in where human resources are lacking, so that God may grant Ukraine and all people life, peace, health, salvation and visitation”.