Metropolitan Joseph Participates in Commemoration of the Armenian Genocide 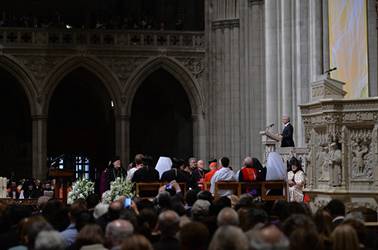 In the Armenian Genocide, over 1.5 million Armenians, Antiochians, Syrians and Assyrians perished at the hands of Ottoman Turks from 1915-1923.

A prayer of remembrance was offered by the attendees from various church leaders including our hierarch, Metropolitan Joseph.

Over 6000 people were present, including: the President of the Republic of Armenia Serzh Sargsyan; the Vice-President of the United States Joe Biden; His Holiness Karekin II, Supreme Patriach and Catholicos of All Armenians; His Holiness Aram I, Catholicos of the Great House of Cilicia; His Holiness Ignatius Aphrem II, Patriarch of Antioch and All East of the Syriac Orthodox Church; members of Congress; His Eminence Metropolitan Joseph of the Antiochian Orthodox Christian Archdiocese of North America; and other Christian leaders from around the United States.

The Rev. Dr. Olav Fykse Tveit, General Secretary of the World Council of Churches, delivered the homily. The Most Rev. Dr. Katharine Jefferts Schori, Presiding Bishop of the Episcopal Church, welcomed attendees to the service, and His Eminence Metropolitan Joseph read the Gospel. The Armenian President Serzh Sargsyan delivered a message on behalf of all the people of Armenia.