Metropolitan Onuphry: The Best Sermon Is To Live A Christian Life

Source: Orthodox Life (Russian)
Even in the family, we should speak less, and set an example of what a Christian should be like.
Pravmir.com team | 14 September 2019 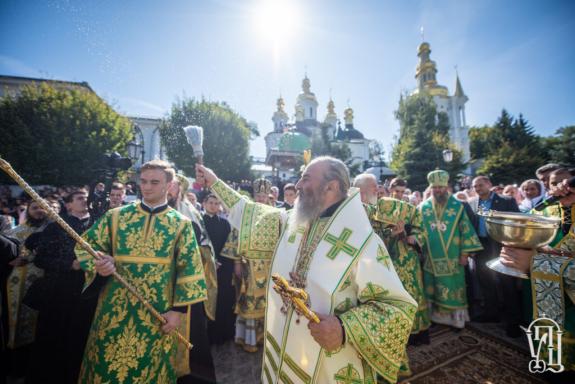 Christians should be preachers of the Word of God not so much in words as in deeds. This was stated by His Beatitude Metropolitan Onuphry of Kiev and All Ukraine in a sermon during the Liturgy at the Dormition Cathedral of the Kiev Pechersk Lavra on September 10, 2019, feast day of the venerable fathers of Kiev Pechersk, who rest in Far caves, as the Information and Education Department of the UOC reports.

This “rule” applies to both monks and laymen, the Primate of the Ukrainian Orthodox Church noted. “Even in the family, we should speak less, and set an example of what a Christian should be like,” the Archpastor said.

If the family has a church-going wife and the husband does not want to attend services, the best sermon is to live a Christian life, His Beatitude Metropolitan Onuphry continued.

“The wife is eager to put her husband in the right way, eating his head off day and night, blaming him, raging at him. It’s better not to read such a sermon. It would be better if you closed your mouth and were silent. Live the Christian way! This will be more useful than many words spoken insincerely, mixed with oblivion, irritation, greed,” the Primate emphasized.

The Archpastor recalled the virtue of humility, which, by the way, the abbot of the Kiev-Pechersk monastery – the Monk Theodosius – was famous for.

“He was an example not so much in a word as in his personal life. All monks looked at him and knew what to do in their life, because they saw a model of holiness in him,” His Beatitude Onuphry said.

At the end of the sermon, the Primate urged everyone to live a Christian life, forgive each other, pray for each other, and try to be a good example for others. “Then God’s blessing will rest on us, and the Lord will help us overcome all difficulties in this life, and in the future life the Lord will grant us eternal bliss,” the Archpastor summed up.

During the service, prayers for peace in Ukraine and the unity of the Orthodox Church were offered.

At the end of the Liturgy, archpastors, clergy, parishioners of the Lavra and numerous pilgrims led by the Primate went through a procession from the Dormition Cathedral to the Far Caves. A prayer service was officiated in front of the icon of the Cathedral of the Reverend Fathers of the Kiev Pechersk.