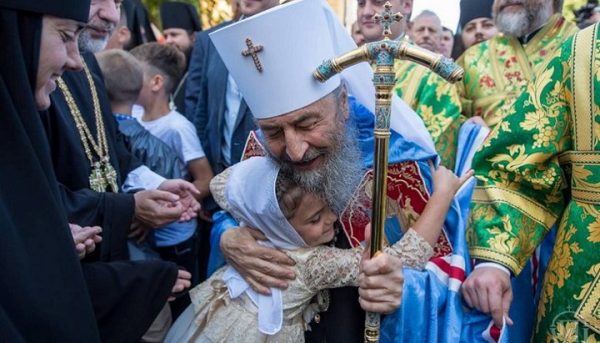 His Beatitude Metropolitan Onuphry of Kiev and All Ukraine. Photo: UOC

His Beatitude Metropolitan Onuphry of Kiev and All Ukraine, the greatly beloved primate of the Ukrainian Orthodox Church, turns 75 today.

Met. Onuphry is recognized throughout the Orthodox Church as a meek and humble man of prayer who enjoys the devotion of the Orthodox faithful who remain devoted to God. He, in turn, is greatly devoted to his flock.

Vladyka labored in asceticism for many years at two of the most important monasteries in the Russian Church: the Holy Trinity-St. Sergius Lavra and the Holy Dormition-Pochaev Lavra, and has served the Church as a hierarch for nearly 30 years.

Hierarchs from throughout the Orthodox world gathered in Kiev in June to celebrate His Beatitude’s name’s day, his 5th anniversary as primate of the Ukrainian Church, and his 75th birthday.

Hierarchs from various Local Churches offered their praise of Met. Onuphry, including His Grace Bishop Anthony of Moravica (Serbian Church), who praised the personal example that Met. Onuphry offers the Church, saying: “For every Orthodox person, His Beatitude Metropolitan Onuphry is an example of piety, monastic struggles, and, as the apostle Paul spoke about light, His Beatitude Metropolitan Onuphry is truly a light between the Orthodox Churches.”

May God grant him any more years of service to His holy Church!