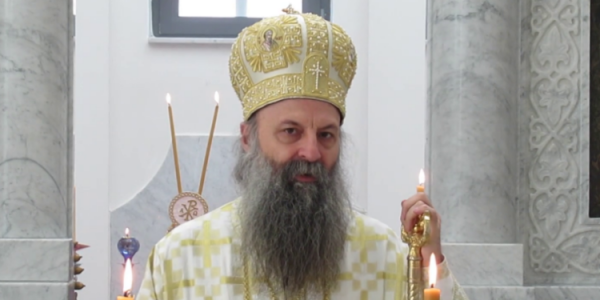 At its session on February 18, 2021, that took place at the Memorial Church of St. Sava in Belgrade, the Holy Synod of Bishops of the Serbian Orthodox Church elected His Eminence Porfirije, Metropolitan of Zagreb and Ljubljana, as the new Serbian Patriarch, reports the official website of the Serbian Church.

Immediately after the election, a thanksgiving prayer was offered and many years were wished to His Holiness Porfirije. The bells at the church of Saint Sava in Vracar rang a few minutes before 4 pm, indicating that the 46th Serbian Patriarch had been elected.

The newly elected Serbian Patriarch Porfirije (Perić) was born on July 22, 1961 in Bečej. He graduated from the Orthodox Theological Department in Belgrade in 1986. At the regular session of the Holy Synod of Bishops of the Serbian Orthodox Church on May 14, 1999, he was elected Bishop of Jegar, vicar of the Diocese of Bačka.

He speaks Greek, English, German, and Russian, and his communication style is always adapted to his audience.

He was ordained as the Metropolitan of Zagreb and Ljubljana on July 13, 2014 at the Cathedral Church of the Transfiguration of the Lord in Zagreb. The solemn Divine Liturgy was officiated by the late Serbian Patriarch Irinej, accompanied by a large number of archbishops of the Serbian Church and other sister Churches, as well as priests and monks, and the faithful.