Source: OCA
Natalya Mihailova | 11 May 2015
His Beatitude, Metropolitan Tikhon, was among the numerous religious and civic leaders who marked the 100th Anniversary of the beginning of the Armenian Genocide in ceremonies celebrated at the National Cathedral here on Thursday, May 7, 2015. 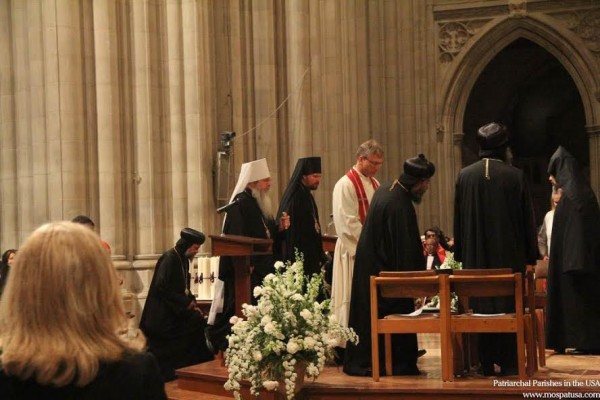 The gathering recalled the Armenian Genocide, during which some 1.5 million Armenians perished at the hands of the Ottoman Empire between 1915 and 1923.

Presiding were His Holiness, Karekin II, Supreme Patriarch and Catholicos of all Armenians; His Holiness, Catholicos Aram I of the Great House of Cilicia; and His Holiness, Patriarch Ignatius Aphrem II of Antioch and All the East of the Syriac Orthodox Church.  In addition to Metropolitan Tikhon, other Orthodox Christian hierarchs present included His Eminence, Archbishop Demetrios of the Greek Orthodox Archdiocese of America; His Eminence, Metropolitan Joseph of the Antiochian Orthodox Christian Archdiocese of North America; His Eminence, Metropolitan Antony and His Grace, Bishop Daniel of the Ukrainian Orthodox Church of the USA; and His Grace, Bishop John of Naro-Fominsk, Administrator of the Patriarchal Parishes of the Moscow Patriarchate in the USA.  Also in attendance were the President of the Republic of Armenia, Serzh Sargasyan; US Vice-President Joe Biden; US Ambassador to the United Nations Samantha Power; and the Rev. Dr. Olav Fykse, General Secretary of the World Council of Churches, who addressed the thousands in attendance.

“Today, as we commemorate the holy martyrs of the Armenian Genocide perpetrated by Ottoman Turkey, we remember the hundreds of thousands of Greek and Syriac Christians who were also victimized by the same perpetrators,” Catholicos Karekin said.  “We remember the other crimes against humanity of the 20th Century: the Jewish Holocaust, the genocides in Cambodia and Rwanda and elsewhere.”

On April 24, 2015, Metropolitan Tikhon joined the heads of Church delegations, the diplomatic community and representatives of many of the world’s governments in Yerevan, the Armenian capital, at a ceremony led by Armenian President Serzh Sargasyan and Catholicos Karekin.  [See related story.  He also attended the Rite of Glorification of the Armenian Martyrs at the Cathedral of Holy Etchmiadzin, the seat of the Armenian Apostolic Church, and addressed the Global Forum on the Armenian Genocide.  [The text of Metropolitan Tikhon’s address may be found here.]