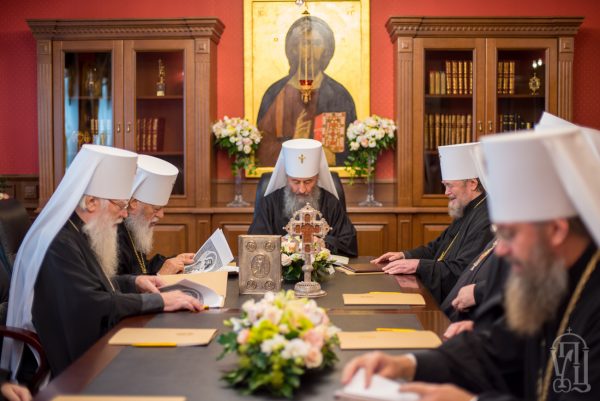 The Synod of the Ukrainian Orthodox Church, at its session held in the Kiev Lavra of the Caves on 25 September 2018 under the chairmanship of His Beatitude Metropolitan Onufry of Kiev and All Ukraine, called for the rejection of the unconstitutional bills which are currently being considered by the Verkhovna Rada (Minute No. 18).

The abovementioned legislative initiatives “are aimed at the judicial liquidation of the Ukrainian Orthodox Church through the means of its hostile takeover by changing its name, unlawfully interfering in its governing bodies and seizing its property (shrines, church buildings and monasteries).”

As is noted in the documents adopted at the results of the session, the Ukrainian Orthodox Church is a religious institution which is registered and acts in compliance with the laws of Ukraine, and any coercion to change its name is illegal and regarded as an interference in the internal affairs of the Church.

The Synod of the Ukrainian Orthodox Church also warned all those involved in the implementation of the unconstitutional bills that their adoption would artificially divide people and make millions of the Ukrainian citizens aliens in their own country, and called upon them to reject these anti-church initiatives, Patriarchia.ru reports, citing the website of the Synodal Department for Church’s Relations with Society and Mass Media.