Metropolitan Tikhon Presides at All Night Vigil for Saint Innocent 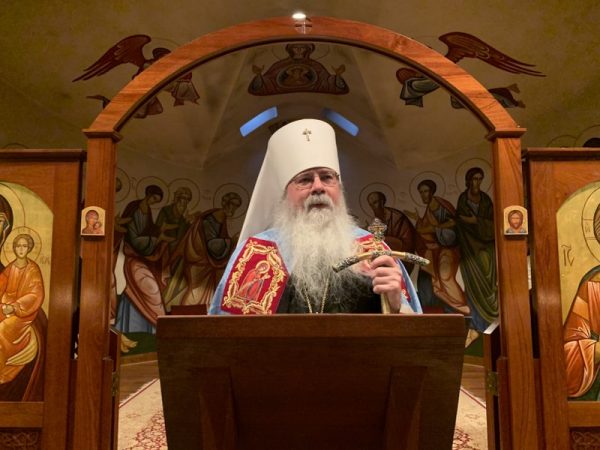 On October 5, 2019, His Beatitude, Metropolitan Tikhon presided at the celebration of the All Night Vigil for the Feast of Saint Innocent, Metropolitan of Moscow, Enlightener of the Aleuts, and Apostle to the Americas, at Three Holy Hierarchs Chapel, Saint Vladimir’s Orthodox Theological Seminary [SVOTS]. At the beginning of the service, His Beatitude delivered the following sermon:

Reverend clergy, distinguished faculty, seminarians, all members of this seminary Chapel community, my beloved children in the Lord, I have come this evening as your bishop to St. Vladimir’s Seminary and Three Hierarchs’ Chapel in order to be with you for the feast of St. Innocent of Moscow, Enlightener of the Aleuts, and Apostle to America. Up to this point in the new academic year, I have been unable to be with you for the celebration of the divine services due to my schedule. Nevertheless, it is according to the will of God that I am with you this evening. I have been eager to be with you, and, by the grace of God, we now have this opportunity to celebrate together the memory of this, our great hierarch.

In the Orthodox Church in America, we are preparing to celebrate the fiftieth anniversary of the canonization of St. Herman of Alaska and the fiftieth anniversary of the proclamation of our autocephaly by the venerable Russian Orthodox Church. This evening and tomorrow morning our sacred assembly will allow all of us to prepare for the marking of these anniversaries by celebrating, praising, and giving glory to our great God for raising up this man, St. Innocent, who followed in the pastoral footsteps of St. Herman. We give thanks to God for raising up this saint in our midst, St. Innocent, as a shepherd who tended his flock in our own times, and in our own lands. The history of all the Orthodox Churches sojourning through North America invites all to share in the celebration of this hierarch as one who valiantly and faithfully served the Church as a missionary and bishop, that is to say, one who both sowed the Word of God and served as one who harvested the bountiful crop. Additionally, his physical labors, literally constructing Church buildings, assured the presence of Orthodox Christianity on this continent to this very day. May his missionary zeal, his faith in Christ, his willingness to do hard work be not only the subject of our commemoration, but an inspiration for each of us in all that we do laboring for the most holy Church of Christ.

Indeed, the anniversaries that we will mark in the coming year in the Orthodox Church in America are anniversaries for all Orthodox Christians. Our Venerable Father Herman of Alaska stands as a patron for all Orthodox Christians in America according to the inscrutable providence of God. A lowly monk, well versed in the scriptures and the traditions of the Church; a lowly monk who sought to protect and defend the downtrodden, the weak, the widows, and the orphans; a lowly monk burning with faith in Jesus Christ; a lowly monk who labored in the fields of evangelization of the native Alaskans – people of this continent; a lowly monk whom we celebrate as a great and highly exalted man of God, because even now he serves us as the brilliantly shining North Star, guiding us to the Church, to salvation, to Jesus Christ.

I congratulate Fr. Chad, the faculty, the administration, and, above all, the seminarians for what seems to be a beginning of the academic year that is well-pleasing to God. I note with paternal pride the various events that have taken place on campus since the beginning of the year, the visits of hierarchs, the recent conference of the Orthodox Christian Leadership Initiative, the publication of new books by the seminary press, but also the regular, seemingly mundane, day-to-day activity of the seminary: faculty meetings and seminars, classes, and the daily celebration of the sacred and divine services. May God bless you all – faculty, administrators, seminarians – in all that you do.

I would like to take this moment and invite all members of the St. Vladimir’s Seminary community to join me as I undertake my own spiritual preparation to begin our anniversary year. On December 12, in the evening, I will serve at St. Sergius Chapel at my Chancery, a Vigil and Divine Liturgy for the feast of St. Herman. No doubt the exertions of this Vigil will require great efforts on the part of the participants, but there is no greater reward than what exists for those who long fervently for God. As the day draws closer, more information will be made available from my Chancery.

Finally, before we begin this Vigil tonight, I offer this last exhortation: as we recall in hymns and praise the Lord’s saving resurrection, and hear of his marvelous works wrought by his blessed saint, St. Innocent, let us recall that no greater celebration, no greater event can be made, but coming to know and love God. To do this requires vigilance so that we call to mind the object of our affection, Jesus Christ, day and night. And if we come to love him, then we will always remember him and try to please him; day and night our mind and our heart, our very being, will be occupied with nothing and no one else. As St. Herman himself exhorted us, “For our good, for our happiness at least let us make a vow that from this day, from this hour, from this minute we shall strive to love God above all else and to fulfill His holy will.” Above all, to everyone gathered in this venerable seminary Chapel, I call you, I invite you to enter into the celebration of this mystery, the mystery of our salvation, the fruits of the labors of St. Herman, St. Innocent, and what all Orthodox Christians in America are to strive for.