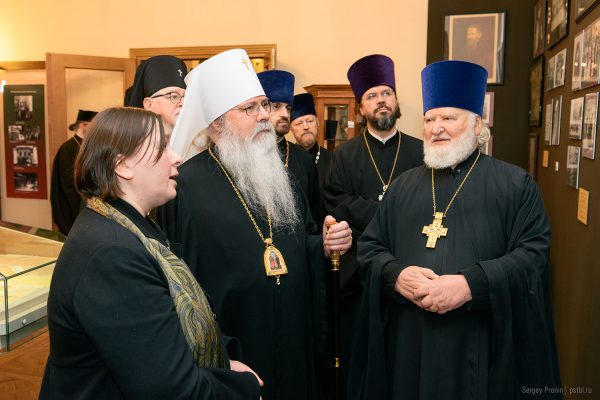 On December 8, 2019, His Beatitude Tikhon, Archbishop of Washington, Metropolitan of All America and Canada, who is on a visit to Moscow for the 25th anniversary of the Moscow representation of the Orthodox Church in America, visited the Moscow Diocesan House – the main building of the St. Tikhon Orthodox University of the Humanities, to preside over a symposium devoted to the life of the Orthodox Church in America.

The symposium was attended by members of the OCA delegation including Archbishop David of Sitka; Archimandrite Andrei, Bishop-elect of Cleveland, Auxiliary to Archbishop Nathaniel of the Romanian Episcopate; Archpriest Alexander Rentel, chancellor of the Orthodox Church in America; Archpriest Daniel Andreyuk, OCA representative to the Patriarch of Moscow and All Russia; and Protodeacon Joseph Matusiak, secretary to the Primate of the Orthodox Church in America.

Present at the symposium were also Bishop Clement of Krasnoslobodsk and Temnikov; Archpriest Alexander Ageikin, deputy head of the Moscow Patriarchate administrative secretariat; Archpriest Igor Yakimchuk, DECR secretary for inter-Orthodox relations; D. I. Petrovsky, DECR; Moscow clergy and laity, professors and students of the St. Tikhon University and other theological schools in Moscow.

Before the beginning of the symposium, the Primate of the Orthodox Church in America visited the museum of the Russian Church’s new martyrs and confessors formed in the university.

At the Diocesan House council hall, in which the historic 1917-1918 Local Council took place, Metropolitan Tikhon was met by the choir of the university’s department of theology who sang in English the hymns of praise to St. Tikhon the Patriarch of All Russia.

The rector of the university Archpriest Vladimir Vorobyev, in his welcoming speech remembered that almost 28 years ago, Protopresbyter John Meyendorff, dean of St. Vladimir’s Seminary, spoke at the first conference held by the university soon after its opening. Now the university was receiving with joy a delegation of the Orthodox Church in America led by its Primate, he said.

Metropolitan Tikhon delivered remarks on “The Apostolic Work of the Church in North America”. His Beatitude presented the conception of the internal and external life of the Orthodox Church in America giving special attention to the development of spiritual life, pastoral care, relations with those around, religious educational work and preaching of the gospel.

The next speaker, Archimandrite Andrey, focused on the conception presented by His Beatitude that calls upon all Orthodox Christians in America to rethink the essence of Christian life on the basis of a revival of the Eucharistic principles.

Hegumen Joseph (Kryukov) delivered closing remarks on “The Valamo mission in Alaska: Lessons of the past and prospects for the missionary work in America and Russia”. He presented a view of the spiritual life of the Church in America proceeding from the experience of the Valamo mission’s service in Alaska.

After that, the Primate of the Orthodox Church in America and members of his delegation answered numerous questions from university students.

In his closing remarks, Archpriest Vladimir Vorobyev thanked His Beatitude Tikhon and presented him with an icon of his heavenly patron St. Patriarch Tikhon painted at the university’s church art department, and books by Protopresbyters Alexander Schmemann and John Meyebdorff published by the university. In his turn, the Primate of the Orthodox Church in America presented Father Rector with a decorated cross.