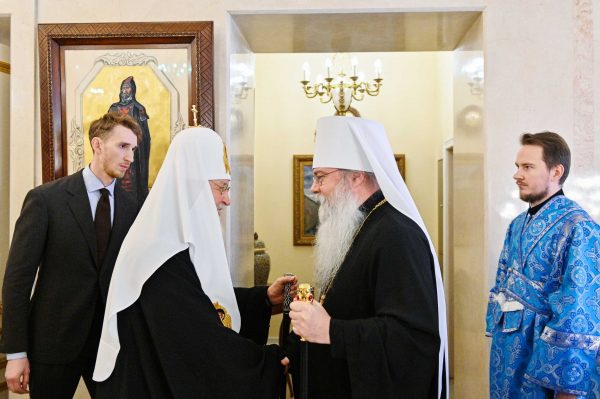 On 6th December 2019, at the Patriarchal and Synodal residence in St. Daniel’s Monastery in Moscow, His Holiness Patriarch Kirill of Moscow and All Russia met with His Beatitude Metropolitan Tikhon of All America and Canada.

His Beatitude Metropolitan Tikhon was accompanied by Archbishop David of Sitka and Alaska; Archimandrite Andrei (Hoarşte), bishop-elect of Cleveland, auxiliary to the archbishop of the Romanian Episcopate of the Orthodox Church in America; Archpriest Alexander Rentel, chancellor of the OCA; Archpriest Daniel Andrejuk, rector of the OCA Representation in Moscow; and Protodeacon Joseph Matusiak, secretary to the OCA Primate.

Prior to the brotherly meeting His Beatitude Metropolitan Tikhon of All America and Canada celebrated a moleben at the Church of All Russian Saints.

During the meeting that followed His Holiness Patriarch Kirill expressed satisfaction with the high level of bilateral relations between the Russian Orthodox Church and the Orthodox Church in America.

His Holiness mentioned an educational project of the Summer Institute, organized by Ss. Cyril and Methodius Theological Institute of Postgraduate Studies for representatives of various Churches who come to Moscow to learn more about the life of the Russian Orthodox Church.

“In compliance with the agreement between our two Churches, among those studying in the Summer Institute are your representatives, your clerics. In particular, Bishop Daniel of Santa Rosa took a course there. We believe that this means of developing bilateral relations is of great importance,” His Holiness said.

He spoke in favour of promoting pilgrimage visits to the Russian Church from the Orthodox Church in America. “We highly appreciate an opportunity to meet with representatives of your Church when they come to Moscow as pilgrims,” Patriarch Kirill added.

His Holiness especially emphasized the important role of the OCA Representation in Moscow, opened at the Church of the Holy Great Martyr Catherin In-the-Fields in 1994, in maintaining the bilateral relations.

Having mentioned some milestones in the history of the Orthodox Church in America, in particular, the 50th anniversary of its autocephaly, Patriarch Kirill said: “I remember what joy it was for the Russian Church to have an opportunity to affirm the autocephalous status of your Church and put an end to the divisions that had been caused by many factors, including the political ones, of the first quarter of the 20th century. The relationships between the Moscow Patriarchate and the Orthodox Church in America were not just resumed, but affirmed canonically, and despite a very complicated political context of the time there was a very important achievement, for the Eucharistic communion was restored and our Churches embarked on a path of brotherly cooperation.”

As the Primate of the Russian Church noted, the current difficulties in the Russian-American relations “do not prevent the two Churches from preserving the unity, sincere love and respect for each other.”

During the meeting His Holiness mentioned the situation of Orthodoxy in Ukraine, saying: “I would also like to thank you for rendering prayerful support to the suffering Ukrainian Orthodox Church, for your appeal in support of His Beatitude Metropolitan Onufry and the canonical Ukrainian Orthodox Church, for the appropriate decision of your Church’s Synod. I would like to especially emphasize your principled position of non-recognition of the so-called ‘Orthodox church of Ukraine’.”

“Although we are now facing difficulties in developing the inter-Orthodox relations, our two Churches are in full cooperation and demonstrate like-mindedness on a number of very significant issues on the current pan-Orthodox agenda. I believe that the factor of our relationships can have a positive effect on the pan-Orthodox relations between the Local Churches,” His Holiness Patriarch Kirill added.

His Beatitude Metropolitan Tikhon of All America and Canada thanked His Holiness Patriarch Kirill for the meeting and for the warm hospitality in Moscow, saying in particular: “You labour under the burden of many pressures, and I would like to assure you of my personal prayers, as well as of fraternal support of the Holy Synod of the Orthodox Church in America.”

The Primate of the Orthodox Church in America said a few words about His Holiness Patriarch Alexy II of blessed memory, who had led the Russian Orthodox Church for over 18 years. On 5th December the Russian Church commemorated the 11th anniversary of the demise of its 15th Primate. “His Holiness was a good friend of the Orthodox Church in America, and his visits to our Church are remembered with fondness, especially by the current Primate who as a young novice was blessed to present flowers to Patriarch Alexy when he visited St. Tikhon’s Monastery,” Metropolitan Tikhon said.

His Beatitude noted the importance of the bilateral relations between the Russian Orthodox Church and the Orthodox Church in America, having mentioned his meeting with Metropolitan Hilarion of Volokolamsk in October during the DECR chairman’s visit to the USA.

The participants in the meeting discussed a wide range of topics pertaining to the bilateral cooperation and the situation in the Orthodox world.