Source: OCA
Natalya Mihailova | 09 December 2014
His Beatitude, Metropolitan Tikhon, presided at the celebration of the Vigil and Divine Liturgy marking the Patronal Feast of the Orthodox Church in America’s Representation Church of Saint Catherine here December 6-7, 2014. 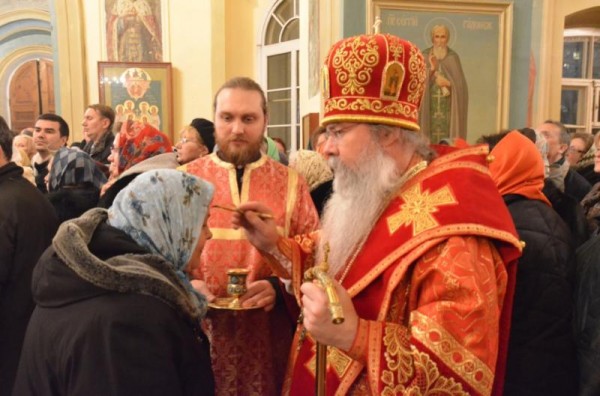 Established in 1994 in a chapel in Moscow’s Danilov Monastery, the OCA’s Representation to the Patriarchate subsequently moved to Saint Catherine Church, which had been closed for some 60 years during the communist era.  The church was reconsecrated in June 1999.  [Read a detailed history of the church.]  In recent years, the church building has undergone major renovations, in addition to providing liturgical services, Church school and adult education classes, and a variety of charitable ministries.  [See related related story.]

At the conclusion of the Saturday evening Vigil, the Akathistos Hymn in honor of Saint Catherine was celebrated, after which Metropolitan Tikhon presented certificates of recognition to several members of the parish in appreciation for their devotion to the community.

“How are we to ‘bear testimony?’” in the face of adversary in imitation of the Great Martyr Catherine, asked Metropolitan Tikhon in his homily at Sunday’s Divine Liturgy.  “By being bearers of Christ’s light. As Saint Paul says,  ‘Awake, O sleeper, and arise from the dead, and Christ shall give you light.’ We should cling to Christ and receive light from Him through prayer, through the Scriptures and through the services of the Church. We should strive to have His light permeate us and become a part of us. We only need to make a small effort and God will do the rest. He gives us the words we need, the courage we need and the endurance we need to bear testimony.”  [The complete text of Metropolitan Tikhon’s sermon appears below.]

Concelebrating at the Divine Liturgy with Metropolitan Tikhon were His Grace, Bishop Alexander of Toledo and the Bulgarian Diocese; His Grace, Bishop John of Naro-Fominsk, Administrator of the Patriarchal Parishes in the USA; who Archimandrite Alexander, Dean and OCA Representative to the Moscow Patriarchate and the parish’s clergy; and the clergy members of the OCA delegation accompanying Metropolitan Tikhon.  Also concelebrating was Archpriest Nikolai Balashov, Deputy Chairman of the Patriarchate’s Department for External Church Relations,  who represented His Eminence, Metropolitan Hilarion of Volokolamsk.  [From 1995 until 2002, when he was consecrated to the Episcopacy, Metropolitan Hilarion had served as a priest at Saint Catherine Church.]

Among others present were Dmitri Penkovsky and Dimitri Petrov—humanitarian aid workers for International Orthodox Christian Charities—who had been taken hostage in late 1997 while delivering essential provisions to refugees from the Chechen conflict and released the following year.  [See related story.]

At the end of the Liturgy His Beatitude presented a framed print of St Michael’s Cathedral in Sitka, Alaska (by Matushka Xenia Oleksa) to Canadian Ambassador John Kur, who was present for the celebration.

Most viewed articles
“Do Not Weep”139
Best Films of the Pokrov Film Festival Have Been Determined125
Christ the Life Giver119
Archbishop Peter of Chicago and Mid-America in an interview to Poltava Diocese’s press service reveals interesting moments in the life of St John (Maximovich)103
(VIDEO)Celebrating 5 years of Byzanfest International Orthodox Film Festival73
Patriarch Kirill Answers Questions from Participants of the Ninth Faith and Word Festival59
The Religion of Self31
Using Our Time Wisely to Cultivate the Seeds of Faith2
Most popular authors
Pravmir.com team360
Archpriest Peter Olsen139
Fr. Theodore Stylianopoulos119
Fr. Gabriel Bilas31
Priest Luke A. Veronis2