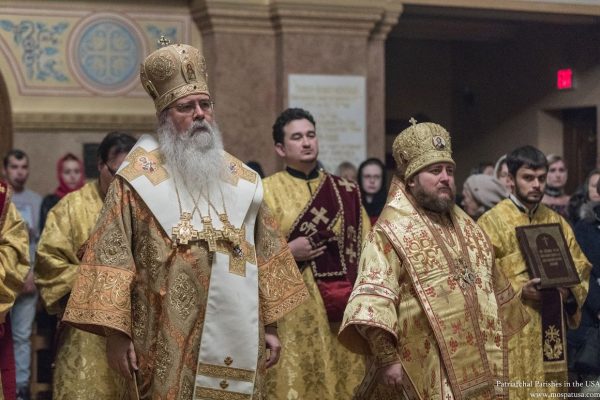 Concelebrating with Metropolitan Tikhon was Interim Administrator of the Patriarchal Parishes in the United States of America, His Grace, Bishop Matthew of Sourozh.

At the conclusion of the Molieben in honor of Saint Nicholas of Myra that followed the Divine Liturgy, Bishop Matthew warmly greeted Metropolitan Tikhon, thanking him for his presence and presenting him with a jade prayer rope in commemoration of his visit.

“I greet you on this the feast of Saint Nicholas, the altar feast of this great cathedral,” Metropolitan Tikhon said in response.  “It is a great blessing for me to be able to be with you here today, especially since it was my predecessor and patron, Saint Tikhon of Moscow, who consecrated this cathedral.

“I am also grateful to receive the blessing of His Holiness, Patriarch Kirill, a great friend of the Church here in North America, and the one who represents that ancient church which recognized the need for salvation and pastoral care here in North America and eventually granted the Orthodox Church in America it’s autocephaly,” Metropolitan Tikhon added.  “‎By his prayers and gift of love for us, we have been able to gather here together with Your Grace, and participate in this beautiful gift of prayer and worship to God which unties all of us in Christ no matter if we are in Russia, Great Britain or America‎.”

A lenten luncheon followed in the cathedral refectory, during which Metropolitan Tikhon and Bishop Matthew discussed cooperation between the Orthodox Church in America and the Patriarchal Parishes in the USA and related matters of mutual interest.