Source: OCA
Natalya Mihailova | 21 February 2015
His Beatitude, Metropolitan Tikhon spoke at a memorial for the 21 Coptic Christians who were beheaded by IS in Libya at Archangel Michael and Saint Mena Coptic Orthodox Church here on the evening of Thursday, February 19, 2015. 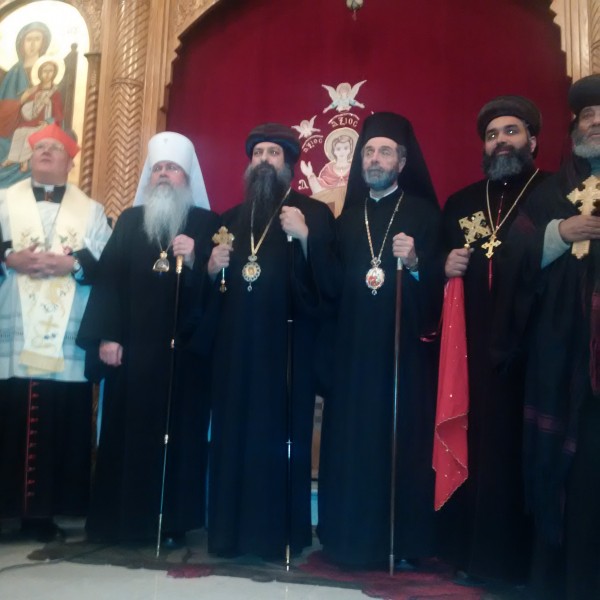 The gathering was hosted by His Grace, Bishop David of New York and New England of the Coptic Orthodox Church.

Among those in attendance were His Grace, Bishop Sevastianos of Zela, Chief Secretary of the Holy Eparchial Synod of the Greek Orthodox Archdiocese of America, who spoke on behalf of His Eminence, Archbishop Demetrios and the Archdiocese.  Other attendees included His Eminence, Archbishop Zekarias of the Ethiopian Church; His Eminence, Archbishop Silvanos of the Syriac Church; numerous other hierarchs and clergy from the Oriental Churches; Roman Catholic hierarchs Timothy Cardinal Dolan of New York and Bishop William Murphy of Rockville Center, NY; Archpriest John Jillions, Chancellor of the Orthodox Church in America; Protodeacon Joseph Matusiak; civic and political leaders from Staten Island and Brooklyn; and representatives of the New York City Police and Fire departments.  Local media and Lauren Green from Fox News also were present.