Metropolitan of Zagreb and Ljubljana dies 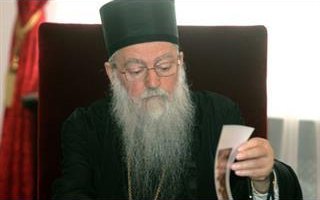 A bishop of the SPC for as many as 37 years, he first served as the bishop of Lepavina, and then as the vicar bishop of Patriarch German.

He was elected the bishop of the Diocese of Zagreb in 1977 at a regular session of the Holy Assembly of Bishops of the SPC, and became the metropolitan of Zagreb in 1982.

At his proposal, the diocese was renamed to the Diocese of Zagreb and Ljubljana a year later.

Jovan Pavlovic was born in October 1936 in Medinci, near Podravska Slatina in Croatia’s Slavonia region.

After completing his postgraduate studies, he served at the seminary of Saints Cyril and Methodius in Prizren, Kosovo-Metohija, and then at the seminary of the Krka Monastery, where he was ordained in November 1967. He was a professor of theology there from 1972.

Metropolitan Jovan was a representative of the SPC in the commission on inter-church aid in Geneva between 1982 and 1992, and also took part in many inter-church events in the former Yugoslavia and worldwide.

As chairman of the Episcopal Council of the SPC in Croatia, he was in charge of cooperation with the country’s secular authorities and worked on strengthening Serb educational institutions there.

He played an important role as a member of a commission charged with taking over sacred church items taken away from the SPC during World War II.

He was very committed to renovating the Serbian Orthodox churches in his diocese, such as the Lepavina Monastery, which was built around 1550.