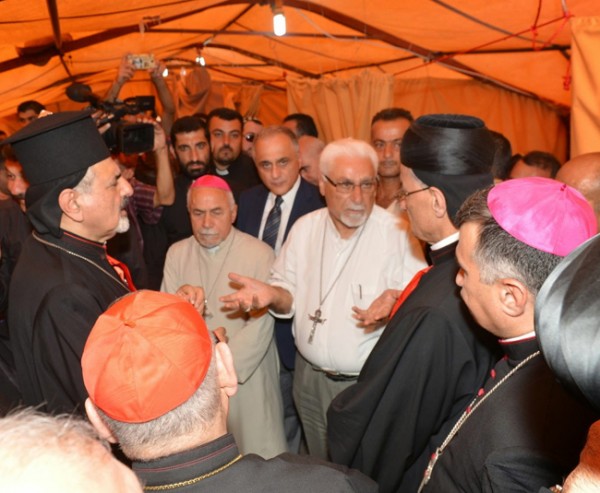 The patriarchs met Aug. 27 at the Maronite Catholic patriarchate at Bkerke, north of Beirut, for a special summit to address the crisis in the region. They were later joined by the United Nations’ special coordinator in Lebanon and the ambassadors of the five permanent member-countries of the U.N. Security Council.

“The very existence of Christians is at stake in several Arab countries — notably in Iraq, Syria and Egypt — where they have been exposed to heinous crimes, forcing them to flee,” the patriarchs said in a statement after the summit and meeting with diplomats.

They lamented the indifference of both Islamic authorities and the international community over attacks against Christians, who have been in the region for 2,000 years.

“We call for issuing a fatwa (Islamic religious ruling) that forbids attacks against others,” they said.

The prelates’ meeting was a follow-up to their first summit Aug. 7. It also follows a trip by several of them to Irbil, the capital of Iraq’s Kurdish region, to give moral and spiritual support to the flood of Iraqi minorities driven from the Ninevah Plain by the Islamic State militants.

The prelates stressed the need for cutting off the sources of terrorism and called on the world’s major powers to deprive extremist groups of resources by compelling countries financing them to stop their support.

Solutions to the Islamic State crisis must involve “dealing with the reasons that produced the miseries in the Middle East,” and harmony must be restored between the components of these countries, they said.

“The international community must act and eradicate” the Islamic State, the patriarchs said. “This is required from the United Nations and the U.N. Security Council.”

They also stressed “the necessity of working to liberate the towns of Ninevah and facilitate the return of the displaced to their homes, in addition to ensuring the security of these towns with local and international guarantees to prevent displacement.”

The patriarchs denounced the “bleeding” that continues in Syria and said the conflict there must be solved by “dialogue and through a political solution.” They criticized the international community for not resolving the April 2013 kidnapping of two Orthodox bishops in Syria.

The prelates applauded the region’s Christians, who “are committed to the values of the Gospel and the teachings of Christ” exemplified in their relationships with others, “including their Muslim brothers, who live with them in the same nations.”

As for the threat of the Islamic State in Lebanon, particularly in light of the Islamic militants’ incursion into the country near its border with Syria early August, the prelates underscored “the importance of the Lebanese political system that separates between the religion and the state, and which acknowledges religious freedoms.”

“We reject religious extremism in Lebanon. Lebanon is a country for all and not a country where there are different religious emirates,” they said.

About 33 percent of Lebanon’s existing population of 4 million is Christian, with the majority Maronite Catholics. But that demographic has changed, with the flood of refugees from neighboring Syria, mostly Muslim, now equal to more than one-quarter of Lebanon’s population.

Under Lebanon’s power-sharing system, the president must be a Maronite Catholic, but that post has been vacant since the term of former Lebanese President Michel Suleiman ended May 25. Rival political blocs are still divided over a new leader.

The patriarchs addressed the impasse, urging “all political blocs to isolate the presidential elections from regional and international conflicts and to reach an accord regarding the election of a president as soon as possible.”

On Aug. 28, Cardinal Rai left for the Vatican, where he was to meet with Pope Francis to discuss the crisis in Iraq and the region as well as Lebanon’s presidential impasse.

A group of the patriarchs, along with Cardinal Leonardo Sandri, prefect of the Congregation for Eastern Churches, are scheduled to participate in the Sept. 9-11 In Defense of Christians Inaugural Summit for Middle East Christians in Washington. As part of that visit, the prelates also plan to meet with members of Congress and White House officials.