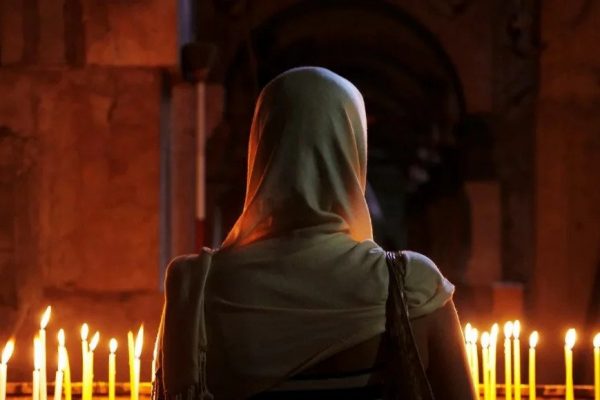 Last night found me yelling at the television once again over a panel discussion about “science and religion.” Both sides thought that rational processes can only take us so far in the journey to faith (agreed). After that, people turn to some other resource in order to connect with God (so far so good). What they use is their emotions.

Around my house, that’s when the sputtering starts. Only in the realm of religion is it assumed that every experience is a subjective experience, which means it’s an emotional projection—which means: Look, dear, a lunatic.

That little word, “feelings,” contributes to our confusion. We expect it to stretch over two divergent concepts, and don’t notice when we switch from one meaning to the other. This was evident, for example, in the “Star Wars” series. The soon-to-be bad guy, Anakin Skywalker, was warned not to be ruled by his “feelings,” his impulses of anger and vengeance. But the good guy, Luke, was encouraged to put more trust in his “feelings;” in that case, it meant his sense of connection with the Force.

But then there’s the process of perception, and, confusingly, we use the word “feelings” here too. We can feel that autumn is coming, by some combination of our physical senses. We feel a change in the mood of a gathering, by a yet more subtle means. We are registering “feelings” all the time, through mind and body and an agile combination that seems to need a name of its own. Though many perceptions flow through us unnoticed, we can learn by discipline to raise them to awareness. Luke was urged to feel the presence of the Force-to gather his scattered senses and focus them on something just under the surface, something he had no prior experience of perceiving. He had to learn to recognize the Force, through concentrated attention. He had to trust his “feelings.”

This isn’t “feelings” in the emotional sense; these feelings aren’t reactions, but perceptions. (Luke may have felt emotional toward the Force, but that was after he felt the Force itself.) This second kind of “feelings” isn’t well-defined. Is it intuition? Is it a sixth sense? Is it new-age woo-woo flakiness?

Part of our problem is that we think people are solely made up of two equal-and-opposite faculties, reason and emotion. Reason is thought to be objective while emotion is subjective. So if God cannot be proven by reason, belief in him must be a private party. It must be an impulse that arises from emotion, powerful but untrustworthy, and applicable to nobody else. This is why religious people are regularly admonished that their beliefs are “true for you, but not for everybody.”

If reason and emotion are all we’ve got inside, there’s no room for that other kind of “feelings.” But in first-millennium Christian spirituality there’s another concept, that of the nous. This Greek word gets translated in our Bibles as “mind,” but there really is no English equivalent. It does not mean merely the rational intellect. The nous is like a radio inside each person that can receive impressions from God. It can receive any kind of impression, from anything; most of the time the nous is just wandering around looking for something to entertain or excite itself. At a minimum, the nous usually still receives impressions from God in the form of conscience. (You know you’re not just talking to yourself, because it’s saying things you don’t want to hear.) After it encounters something, the nous may react with a thought or an emotion, but those are secondary reactions. What comes first is the encounter.

First-millennium Christians understood their task as submitting the whole person to the transforming power of God, beginning with the nous. They spoke of trying to “capture” the mind (nous) and bring it steadily into the presence of God, which was understood as being in the center of the chest, in the “heart.” (“Be transformed by the renewal of your nous,” Romans 12:2.)

This understanding of the nous as the place we have a primary encounter with God gives us an alternative to the forced and limited dichotomy of reason and emotion. In this view, a spiritual experience doesn’t spring from our emotions. It’s a real connection with God. It’s as real as a trip to Turkey. We experience it by means of an interior faculty built into us, by God, for the express purpose of communion with him. We may feel emotions as a result of this communion, and we may develop new thoughts and insights, but the initial encounter is the point.

The continuing mystery to me is why not everyone senses this interior snap of connection with God. It’s as clear to me as daylight. It doesn’t require any “leap of faith.” God’s flowing presence continues steadily, separate from whatever emotions or thoughts I have about it. This is not like assenting to a concept about God, but more like putting your finger in an electric socket. “I am the life,” Jesus said (John 11:25), and everything and every person is shot through with the energy of God, simply due to being alive. He is light, and his presence illuminates us; he is love, and we keep discovering signs of his provision for our care. We can tune in to this presence or we can ignore it and grow numb, but it never wavers; it is always there. It is the force that fills and sustains the universe.

This is true for me and it’s true for you, too, even if you can’t sense it. I have often puzzled about why some people don’t seem to be able to sense this. I hope one day they will. I think I know what that’s like. I was a near-sighted kid, and regularly found myself in situations where my parents would be pointing emphatically at something they wanted me to see, and I would squint and strain and still just not see it. A bird in a tree, for example. I might say “No, I still don’t see it,” or I might fib and say “Oh, I see it now,” just to get it over with. But I never said, “There is no bird.”

[When I sent this essay to my mailing list, I added these notes about further thoughts that arose during the editing process:

The editor asked, What about people who seek God all their lives but never feel his presence? I said I think the longing is a sign that he is already present to them, in the faintest initial way. If you didn’t sense him at all, you’d shrug off the concept and think believers were just crazy. If you didn’t sense him at all, why would you go to church? For the cookies? It makes more sense to sleep in.

But people keep getting up and going, because something inside is urging them forward, seeking him. It’s like walking through the mall and getting a whiff of cinnamon, and suddenly you crave a cinnamon roll. Before that, you weren’t even thinking of a cinnamon roll. The few molecules drifting into your nostrils caused everything to go on alert and say “I want that!”

Likewise, if you are longing for God, you are beginning to experience his presence, and when the presence gets stronger it feels like more of that, along the same line. It *always* feels like longing. It feels like the cinnamon roll is right in front of you, getting closer and closer, so you can hardly stand it. Think of Bernini’s statue of St Teresa in Ecstasy.

What it doesn’t feel like is *empty* longing, loneliness, desolation. You get that sometimes, too. You wake up and find that God has vanished and that’s the saddest feeling in the world. You look everywhere for him. It’s like the woman in the Song of Solomon, going around the city in the night, seeking her beloved. I think somehow this sense of desolation is God’s intention, too. It sharpens the desire to seek him. Sometimes it is due to your own fault, of doing something mean or selfish, and severing your focus on communion with him. The way back is always humility. But sometimes I think he just withdraws so we will run after him. When his presence is near, it carries you; when he withdraws, you have to bend your own will and attention to follow, and that changes you at greater depths.

Those who want to perceive in these analogies a likeness to romantic love are entirely free to do so. I wrote in one of my books (“At the Corner of East and Now”) that religion is not about sex, sex is about religion. Here’s that passage:

God invented sex to teach us something about eternal reality. How could we understand what it’s like for two to become one, union without annihilation? God came up with a human experience that would be universal, common, and enjoyable, and said, “Here, this is what it’s like. This is where you’re going.” Likewise, eating food helps us to understand union in the Eucharist, and parenting teaches us what the Father’s love is like. Sex, eating, parenting, are all good things in themselves, but are also handy object lessons, available to give us ready, simple, intimate analogies for what heavenly reality will be like. In light of this, I think heaven is going to be not so bad.]