In the past few days, damage has been caused to the fragile religious situation in Ukraine as well.
Natalya Mihailova | 15 May 2014
Moscow, May 14, Interfax - The Russian Foreign Ministry believes that the Ukrainian authorities' decision to ban Metropolitan Hilarion of Volokolamsk, the head of the Moscow Patriarchate Department for External Church Relations, from entering Ukraine was an "unprecedented and provocative" measure. 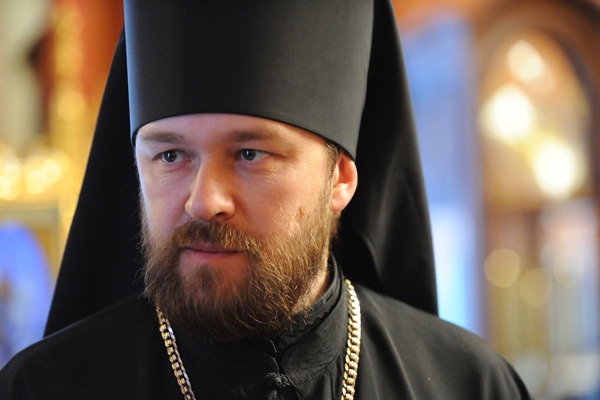 “We demand that the de facto Kyiv authorities provide an exhaustive explanation for such a disrespectful attitude on their part toward a high-ranking clergyman and offer their apology,” the ministry said in a commentary.“Russia is troubled by the continuing measures on the part of the current Kyiv regime that are only serving to further destabilize the general political situation in the country,” it said.“In the past few days, damage has been caused to the fragile religious situation in Ukraine as well. Today even the canonical Orthodox Church has become their target,” the Russian Foreign Ministry said. On May 9, Ukrainian border guards in Dniepropetrovsk told Metropolitan Hilarion to return to Russia without giving any explanation for their refusal to allow him to enter Ukraine. “His Eminence Metropolitan Hilarion arrived in Dniepropetrovsk on a purely peaceful mission: he wanted to congratulate Metropolitan Iriney of Dniepropetrovsk and Pavlograd on his 75th birthday, as well as present him with a congratulatory message from Patriarch Kirill of Moscow and All Russia and a church award – the Order of Holy Prince Daniel of Moscow,” the Russian Foreign Ministry said.