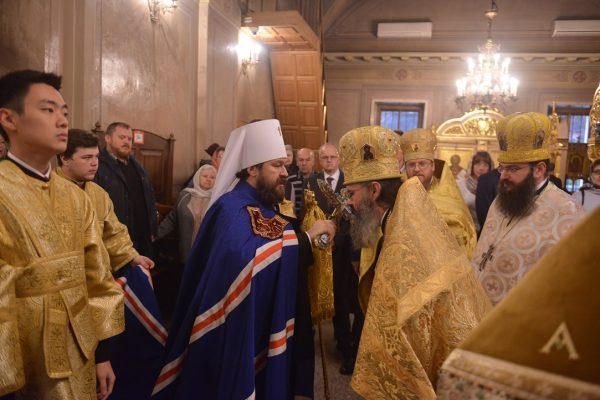 On 10 November 2019, the 21st Sunday after Pentecost, Metropolitan Hilarion of Volokolamsk, chairman of the Moscow Patriarchate’s Department for External Church Relations (DECR), celebrated Divine Liturgy at the Church of St. Nicholas in Kotelniki – Representation of the Orthodox Church of the Czech Lands and Slovakia, which was marking its 20th anniversary.

Among those attending the service was H.E. Peter Priputen, Ambassador Extraordinary and Plenipotentiary of the Slovak Republic to the Russian Federation, who was awarded the Order of St. Seraphim of Sarov, 3rd class, in consideration of his contribution to the development of relations between people in care of the Russian Orthodox Church and the Orthodox Church of the Czech Lands and Slovakia. The Order was presented by Metropolitan Hilarion with the blessing of His Holiness Patriarch Kirill of Moscow and All Russia.

After the Litany of Fervent Supplication the DECR chairman said a prayer for peace in Ukraine.

Archimandrite Serafim (Shemyatovsky), rector of the church, greeted Metropolitan Hilarion and thanked him for attention being rendered to the Representation.

Archbishop Michal read out a welcome address from His Beatitude Rastislav, Metropolitan of the Czech Lands and Slovakia on the occasion of the 20th anniversary of the Representation.

Metropolitan Hilarion greeted all the worshippers on behalf of His Holiness Patriarch Kirill and said on his own behalf that the 20th anniversary was a remarkable jubilee testifying to the strong links between the two Churches that trace their life and liturgical order to the feat of Ss Cyril and Methodius who enlightened Slavic lands and translated the Holy Scriptures and the liturgical books into the Slavonic language. Though our Lord Jesus Christ who has founded the Church means even more, being a corner stone of the Church and its head