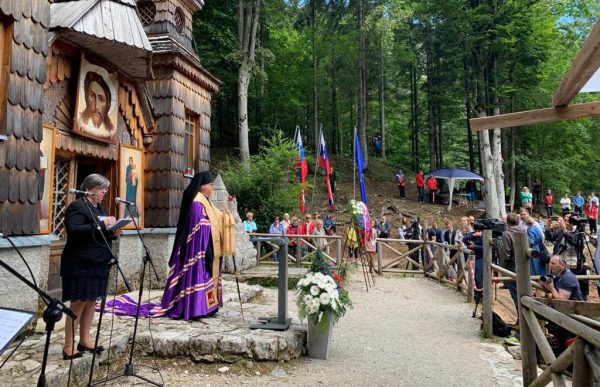 On 25 July 2020, with a blessing of His Holiness Patriarch Kirill of Moscow and All Russia, Archbishop Tikhon, administrator of the Diocese of Berlin and Germany, took part in the memorial services at the Russian Chapel of the Holy Prince Vladimir Equal-to-the-Apostles on the Vrsic Pass in Slovenia.

This year, the ceremony, organized by the Russian embassy in Slovenia, the Slovenia-Russia Society, the Kranjska Gora city administration and the Russian World Foundation, was held under the motto of solidarity and unity of nations and was devoted to all those who, during the pandemic that has become a common disaster, have shown exceptional orderliness, competence and compassion.

Because of the pandemic restrictions, the event was attended by 200 people.

The memorial was opened by the orchestra of the Slovenian police. It performed the national anthems of Slovenia and Russia. The assembly was addressed by Kranjska Gora Mayor Janez Hrovat, President of the Slovenian State Council Aloiz Kovsca, Russian ambassador T. Eivazov, and Slovenia-Russia Society member Urban Ocvirk.

The ceremony devoted to the 104th anniversary of the chapel was attended by President of Slovenia Borut Pahor, chairman of the Slovenian State Council Igor Zorcic, Metropolitan Porfirije of Zagreb-Ljubljana (Serbian Orthodox Church), Bishop Stanislav Lipovsek of Celje (Roman Catholic Church), Bishop Leon Novak (head of the Evangelical Church of Slovenia), and chairman of the Slovenia-Russia Society Saša Ivan Geržina.

Traditionally, President Pahor and Ambassador Eivazov laid wreaths at the Sons of Russia obelisk at the chapel.

Then the head of the Russian Orthodox Church delegation, Archbishop Tikhon of Podolsk, said the Office for the Dead for the Russian war prisoners who died during World War I in Slovenia.

Requiems were sung by the family quartet led by conductor-reader Mathew Kobro from Munich.

During the litany, prayers were lifted up for the repose of the souls of the dead servants of God – Orthodox commanders and soldiers who died from starvation, wounds and cold at that place.

After the service, Archbishop Tikhon addressed the participants in the ceremony:

‘It is with pain that the echo of World War I resounds in our hearts. At that time, on  the Vtsic Pass in 1916 Russian war prisoners were killed by a snow avalanche. Everyone knows that every human life contains a whole universe. All that they held dear – their motherland, family, peaceful sky above, plans, hopes – all that was broken by war.

The sensitive heart should listen what the souls of thousands of those who died tell us, those whose graves are scattered in these places, along the road and in cemeteries of nearby villages. What they tells us silently? – They entreat us to value the human life as a gift of God, to safeguard peace and to prevent terrible tragedies. Eternal memory be to the dead sons of Russia! May the Lord repose their souls in His Heavenly Kingdom!

Allow me to express sincere gratitude to your, Mr. President, and to the Slovenia government and people for the memory of the Russian warriors, for the friendship of our fraternal Slavic peoples as it is visible in this memorial chapel dedicated to the Holy Prince Vladimir, in which prayer is lifted up today. May the Lord preserve us in peace, unanimity and love!’

After the memorial events at the Russian chapel at Kransjka Gora, the members of the Slovenia-Russia Society held their annual meeting.

In the evening of the same day, the Russian Orthodox Church delegation led by Archbishop Tikhon attended the dinner given by Russian ambassador M. Eibazov, the website of the Diocese of Berlin and Germany reports.

The Russian Chapel of the Holy Prince Vladimir Equal-to-the-Apostles under Vrsic Pass (near the Kransjka Gora resort, Slovenia) is a memorial devoted to the Russian soldiers who died there during World War I. The monument is located on one of the slopes of the Julian Alps at 1000 metres above sea level near the Vrsic Pass (1611 m). The road through it joins the central regions of Slovenia with the western ones – the River Soca valley.

During World War I, the town of Kransjka Gora (where the terminal station of the Austrian railway used to be) was a major transit point for delivering ammunition, technical equipment and troops to the Austrian-Italian front. For military needs, the Austrian command decided to build a road through Vrsic. Already in July 1915, a camp for Russian war prisoners was organized near Kransjka Gora, who were building a road through the pass.

On 12 March 1916, one of the Russian prisoner groups who were clearing the road was snowbound by an avalanche together with their Austrian guards; over 300 people were killed. In total, about 10 thousand prisoners died from toil and starvation there (1915-1917).

In memory of their fellow soldiers killed by the avalanche, the Russian war prisoners built in 1916 a small wooden chapel near their temporary barracks.

In the 1920s, the road through the pass was reconstructed; the remnants of those buried along it were reburied in a common grave near the chapel above which a small pyramidal obelisk with inscription ‘To Sons of Russia’ was erected in the 1930s. In those yours, Russian émigré from all parts of then Yugoslavia began gathering each July at the chapel to honour the memory of their compatriots.

After Slovenia became independent in 1991, an initiative group of the Slovenian public, which was to become a core of the Slovenia-Russia Society formed in 1996, began holding at the Russian chapel annual meetings of Russians and Slovenians – politicians, businessmen, representatives of public and church organizations and cultural figures.

In 1995, the Russian chapel was given the status of cultural monument protected by the state. In 2005, the territory around the chapel was transformed into a memorial park and was transferred to the jurisdiction of the Slovenian Ministry of Culture.

In 2006, in anticipation of the 90th anniversary of the Russian chapel, the Slovenian authorities decided to give the road leading from Kransjka Gora and going by the Chapel of the Holy Prince Vladimir to the Vrsic Pass the name ‘Russian Road’.